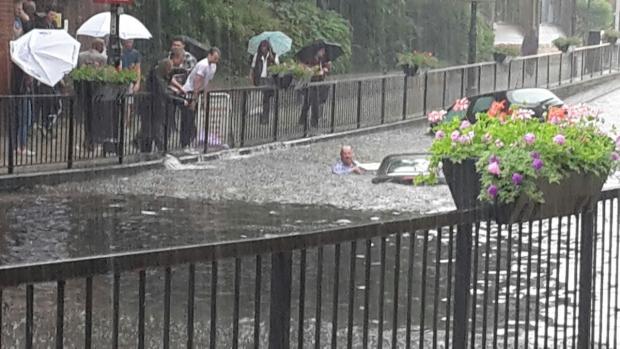 Will Flash Flooding Always Cause Havoc On London?

It seems like a regular occurrence that instances of flash flooding create issue all over the country’s capital.

Even as recently as late June, polling stations had to be moved during the EU referendum vote due to flash flooding across the South East, caused by the British summertime weather that we have all come to know and love (or perhaps just know!).

During the same period, it was reported that vehicles and even homes were being abandoned after being submerged, and there was havoc at Clapham Junction station as one exit was closed due to flooding, and the weather caused issues with the trains meaning many of the display boards were carrying misleading or incorrect information, causing problems to a huge number of commuters in the capital.

But does it always have to be this way? Surely by now we must be able to deal with the extreme weather conditions that are such a part of British life?

Can anything be done?

The majority of problems that are caused by large amounts of rain in a short timeframe can be dealt with through the use of decent drainage systems, and with regular maintenance of these systems.

Without regular maintenance, the type of scenes that London saw recently will continue to be repeated, creating havoc amongst citizens of the city and affecting public transport and other vital services.

Everyone can do their bit to try and stop these issues from recurring by calling in a drainage contractor to check the drainage in their premises, evaluate the exact requirements, and advise on the correct way to deal with it.

Why is Crain maintenance so important?

When flash flooding becomes a problem in a city as vast as London, the number of people affected is almost unimaginable.

Those who are forced out of their homes are often unable to return for weeks, or even months, and may often have to cover some or all of the costs of repair themselves.

Emergency service phone lines become clogged up by those in need due to the weather conditions, meaning those who need the services for other, and often more life-threatening reasons, are left at risk of help not being able to get to them in time.

Public transport systems can become delayed, with many services having to be cancelled due to the affect the weather has on train tracks and roads. The flooding on the roads also makes it impossible for people to drive across certain parts of London, meaning entire regions are practically brought to a standstill.

The routine removal of scale deposits and a full flush through of drainage systems will often be enough to ensure that your drains are capable of dealing with the amount of water that may come through during the type of weather conditions that would otherwise lead to problems such as flash flooding.

It may seem to those living in London that flash flooding is something that is always going to be an issue, but it does not have to be this way, as long as your drains are well maintained and looked after, and all other residents, companies, and councils ensure that the same is true, then these problems could become a thing of the past.

Danny Camp is director of 247 Plumbers Essex, which provides day and night emergency plumbing in Essex and East London.

previous article
A Few Lap Swimming Etiquettes You Need To Know
next article
Will Facebook For Business Unite Employees?