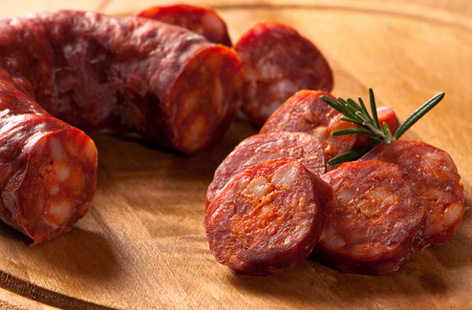 Otherwise known as the ‘golden coast’ of India, Goa is situated between Karnataka and Maharashtra on the country’s south-western coast. The state has a reputation for dishes using fresh seafood and coconut sourced from the local area, but with strong European influences as a result of its history as a former Portugese colony, it has another somewhat unexpected speciality: spicy Chourico sausage.

Much like the colourful communities that make up Goa, Goan cuisine is bold, bright and big on the use of spices. The spicy Chourico sausage – the Portugese equivalent of Spanish Chorizo sausage – is an incredibly popular ingredient among the local, but particularly within the Christian community.

Chourico sausage is made from pork meat, chilli, vinegar, garlic, ginger and a range of spices that usually include turmeric, cloves and cinnamon; however, the local market stalls sell a variety of Chourico that can be flavoured with other spices and vary in heat, ranging from mild to incredibly spicy.

In addition to the varying spice grades of the delicacy, the sausage also comes in a range of different textures, which can be found all across Goa. For example, some varieties will be wet while others are dried, which is usually the result of recipes using different amounts of fat. Each Goan citizen tends to have their own preference on this, so it’s really matter of taste whether they prefer a moist, fatty and heavily-spiced version, or a leaner, mildy-spiced dried sausage.

Much like many recipes in Goan cuisine, the preparation of Chourico is an elaborate process; but once made it can keep for months, which comes in handy during monsoon season when fresh seafood is difficult to come by. Once the pig has been slaughtered, the body is cut into parts and placed in salt to withdraw any moisture, and the meat is then cured in a solution made of ground spices and vinegar – these two ingredients are crucial regardless of the cook or the quality of the pork being used.

Chourico is not quite the same as the Portugese delicacy, chorizo. The Portugese equivalent often contains high levels of salt, as well as preservatives and even colouring agents. They also come in a longer sausage shape, whereas the deep-red sausages produced in Goa are usually made into balls, which makes them a great bite-sized street food for vendors to sell and locals to enjoy on the go. Some ways to serve them include being stuffed into a Goanpav (a type of bread), made into a sausage pullav by adding rice, adding to stews, or simply serving with onions and potatoes to make a cheap but satisfying dish.

If you’re in the UK and are looking to experience a true taste of Goan cuisine, head down to one of London’s best Indian brasseries. With regional chefs cooking a range of authentic Indian dishes, their menus feature specialities from across the whole of India and take inspiration from the Arabian and Portugese influences that are present in the foods of Goa.