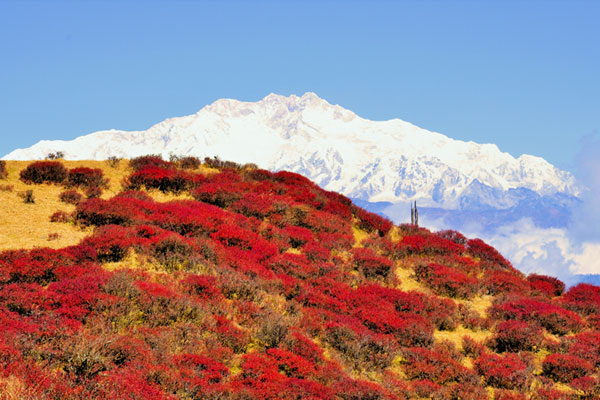 3 Natural Wonders Of India You Can Travel

The West has long flocked to India to get a chance to witness her beautiful landscapes and exceptional wildlife. But where do you start in a country that spans 29 states, roughly 1,600 languages and 35 world UNESCO heritage sites? Luckily, we are here to help.

This biosphere is India’s latest UNESCO addition. Named after Khangchendzonga Mountain, the world’s third highest peak, you can find this delightful corner of flourishing flora and flora in the hills of Sikkim. Spanning an incredible 328 square miles, you can come shoulder to shoulder with animals like the sloth bear, Himalayan tahr and the revered and rare snow leopard.

Its landscape varies from glorious glaciers to thick alpine forests. It is also a bird watcher’s paradise with over 550 species of bird calling these mystical mountains home. Khangchendzonga National Park is ideal for camping and trekking – just make sure to check with the rangers, after all, you do not want to run into a snow leopard!

For an authentic Sikkim treat, you must try momo: found in every home and made with stuffed mincemeat, vegetables and flour dough, it is fashioned into a dumpling and is simply delicious.

With ragged peaks, rolling mist and hidden monasteries, this is a spiritual park whose sheer size makes it feel forever secret and unspoilt from the outside world. Camping here among the mountains and emptiness should be on any adventurers’ bucket list.

It is also a cradle of life; home to more than 375 species, including approximately 31 mammals, 181 birds, 3 reptiles, 9 amphibians and 127 insects. Hunting is forbidden is this dense and diverse landscape.

For a strange and traditional Himachal Pradesh dish, have a bite of Bhey. Using thinly sliced lotus stems, which are then boiled and stir fried with onion, ginger-garlic paste, cayenne pepper, gram flour and more, this dish is both distinct and delicious.

Found in the Northern hills of Assam, this natural reserve has been a designated protected area since the idea was first founded in 1904. One legend ascertains that the forest is named after two star-crossed lovers. A young girl named Ranga and a youth named Kazi were fated to be apart because of their families’ rejection of the union, so they ran away into the forest, never to be seen again. In a slightly less romantic explanation, the forest’s name may have derived from the Indian for ‘land of red goats’.

The site was created and continues to be dedicated to the preservation of rhinos, tigers, elephants, water buffalo and swamp deer. To continue with this eco-friendly mentality, we recommend you eat a vegetarian curry called Labra. Made using sweet squash, eggplant, radish, turmeric, garam masala and cumin, this is a hearty dish made for fuelling ethical explorers.

India is home to too many cherished natural sites to fit in one passage. But her talents are not simply nature-bound. To get a taste of a truly unique cuisine and culture, travel down to one of London’s best fine dining Indian restaurants.

previous article
How Important Is SAS Certification?
next article
How To Buy A File Host Premium Account