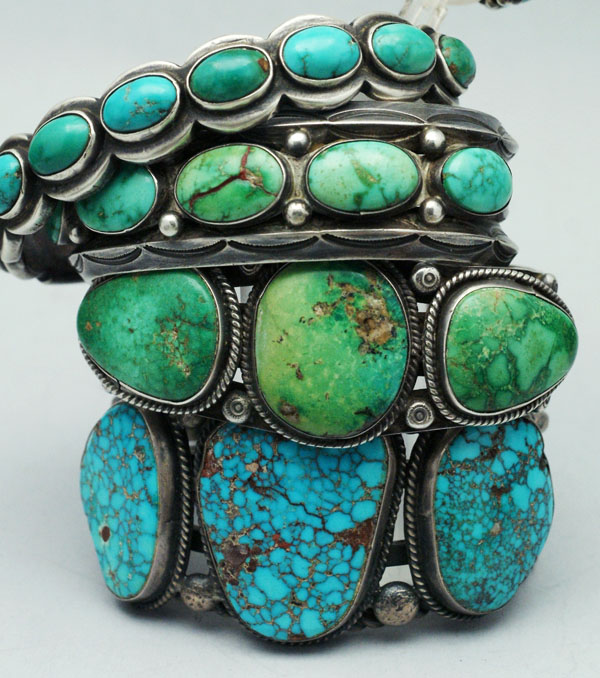 Considered a precious stone in many cultures around the world, this opaque blue-green stone has held a certain mystique that has captivated countless jewelry lovers for thousands of years. As far back as Ancient Egypt, turquoise held deep cultural and religious significance for pharaohs. In the Persian Empire, the stone was worn as wrist jewelry to ward off unnatural death. Across the American Southwest, indigenous tribes continue to value turquoise as a sacred omen and a symbol of prestige, fertility, and wealth. With its rich and varied history of uses, let’s take a look at some interesting aspects of this mysterious stone.

Turquoise Comes in a Variety of Colors

While turquoise is most commonly seen in the West as a bright blue-green tumbled and polished stone, its international counterparts vary greatly when it comes to their color and physical properties.

Since turquoise is formed by chemical reactions to water and other minerals present in certain soil, the stone’s color can manifest very differently depending on where a particular type of turquoise originates. For instance, Iranian turquoise doesn’t exhibit dark markings, known as a stone’s matrix, that’s present in turquoise from the American Southwest. Further east, Tibetan turquoise is generally green, rather than blue.

These differences in mineral composition account for the stone’s diverse appearance worldwide. The amount of copper within the soil that turquoise forms in can affect how blue it appears, whereas zinc deposits can create a yellow or green hue, as seen in rare yellow and green turquoise from certain Nevada mines.

The Turkish Stone” was Once a Taboo Item in Europe

The English word “turquoise” actually comes from its French name, which translates as “the Turkish stone,” nodding to the stone’s international presence for thousands of years. Turquoise was exported heavily from Persia and Turkey along the Silk Road, an ancient trading route between Europe and Asia that brought many exotic wares to the West such as spices, textiles, and even new gemstones. Turquoise, along with Central Asian stones like lapis lazuli were regarded as provocative luxury items in Europe. Sumptuary laws throughout the Middle Ages and the Elizabethan Era restricted exotic gems such as turquoise, gold, and ruby so much so that they were forbidden for commoners and non-clergy lay people to own, much less wear, even if they could afford such jewelry.

Though many Westerners, specifically Americans, see turquoise set in silver jewelry as an ancient art from Southwestern tribes, the combination is actually quite new. Many tribes, including the Navajo, Zuni, Hopi, and Santo Domingo have histories of turquoise jewelry and carvings dating back to 200 B.C., but it wasn’t until the 19th century that Native Americans combined silversmithing into turquoise jewelry design. The introduction of silver technology from Spanish colonists and neighboring Pueblo Indians fueled a rush of new designs that many modern day jewelry collectors now identify as distinctively southwestern.

Despite the “recent” addition of silver to turquoise jewelry, these tribes have always regarded turquoise as a powerful element in religious practices and everyday life. According to Southwest Silver Gallery, a Colorado-based online boutique that specializes in modern jewelry from the Southwestern tribes, turquoise was used in everything from diplomacy, trade, rituals, and artwork. Among these tribes, turquoise is symbolic of wealth, prosperity, and longevity.

Turquoise is considered to be a “healing stone”

Aside from cultural beliefs about its medicinal properties, turquoise is thought to purify energy within a home when used as decor and in a person’s aura when worn as jewelry. With its long history as a powerful cleansing and healing element, people across the world wear turquoise with the belief that it aids in the treatment of anxiety, depression, and even addiction.

The Mystique of Turquoise Lives On

From Eastern beliefs tieing the stone to good feng shui for one’s home to Native American jewelry-making practices that continue to revere the stone as divine, turquoise has influenced many cultures in its long and fascinating history. So, if you’d like to bring some positive energy into your life while looking stylish, consider adding a touch of turquoise to your jewelry collection or home.

previous article
Why The Increase In Xarelto Lawsuits?
next article
Thoughtful and Unique Gift Baskets For Women