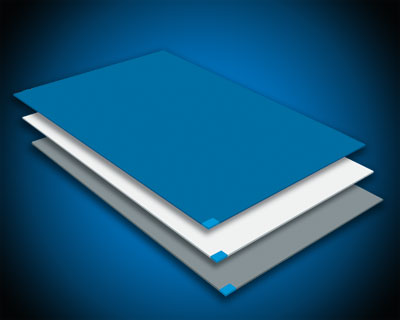 Colour is not considered to be especially important by experts, although some prefer to use white sticky mats because they show up the most dirt and you’ll know when it’s time to change it.

So when should you change the layer? When you remove a layer depends on a few variables. You’ll want to consider how dirty the area is that personnel are coming from. Think about the difference in cleanliness between the areas and the number of people per shift or per hour. Another factor is the size of the mats and how many mats there are and locations.

Typically, a few days of use, while observing, should help to determine when you should change your mat out. And before placing a new mat down or replacing an existing mat, clean the floor thoroughly to remove dirt or particles that may keep the mat from sticking to the floor. When replacing a mat with a new one, remove the sticky residue from the previous mat.

There are many steps and procedures that need to be taken when preparing to enter a cleanroom. You must go through the gowning process before entering. Before stepping onto a sticky mat, make sure that there is a clean layer and that it’s placed properly. You don’t want it to move and you don’t want it too far from the door. Place it right before the threshold.

As you enter the cleanroom, with your cleanroom garments and overshoes, step onto the sticky mat to remove any extra and unwanted contaminants to ensure a clean cleanroom.