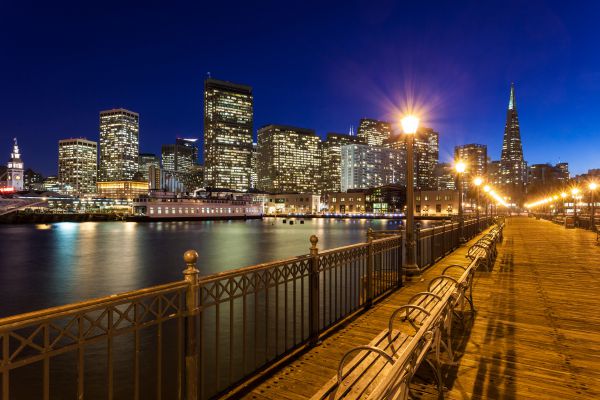 San Francisco is the leading financial hub and cultural center of the northern California. It is also the only consolidated county in California. -The city has a population density of about 6,900 people per square kilometer making it the most densely settled city in the states of California and the second most densely populated city in the United States. -San Francisco is an ancient city that was founded in 1776 by Spanish colonists who established a mission and a fort at the Golden Gate. California gold rush of 1849 brought about rapid growth making the city the largest on the west coast during that time -Some of the most spectacular places to visit in San Francisco include;

The Golden Gate Bridge is the link that connects San Francisco bay to the Pacific Ocean Marin County. The bridge is a famous tourist destination for its depth and powerful currents from the Pacific Ocean. During strong currents, the waters can rise considerably high forming small eddies and whirlpools. This site is also a spot of over 100 shipwreck. During summer, the bridge is usually surrounded by fog, the pressure lowers and the air is moist. This bridge was the longest when it was completed in 1937 but has since been surpassed by 8 other bridges.

The Alcatraz Island is located 2.4 kilometers away from San Francisco and is often referred to as ‘the rock’. The island was initially designed as a federal and military prison and has attracted film makers to produce a movie about the island. Today the island is open for tours and visitors can reach the island by ferry. The island measures about 1.675 feet by 590 feet and is 135 feet at the highest point. The total area of the island is 22 acres.

It is also known as Lillian Coit Memorial Tower. The tower stands 64 meters tall above the ground in Telegraph hill, a neighborhood in San Francisco. The tower was commissioned in 1933 and was added to the national register for historic places in 2008. The tower was designed by two main architects, Henry Howard and Arthur Brown and together with 27 on site architects. The tower is an iconic symbol in San Francisco and attracts many visitors from around the world.

The Castro theater is a major landmark in San Francisco. It is a popular movie palace located in Castro district. It was built with a Spanish colonial facade. It has a sitting capacity of about 1,400 people with 600 seats on the balcony and 800 seats down stairs. The theater was built in 1910 by the Nasser brothers who still owns the theater. The interior is luxurious with concave and subtly convex walls and a very beautiful ceiling made of hardwood.

The San Francisco ferry building is a terminal for ferries that travel across the San Francisco bay. It is home to nice restaurants and open air market. The building was built in 1892 but has undergone major renovations since then.

Green card Lottery offers all visitors around the world to enjoy these and more spectacular places.