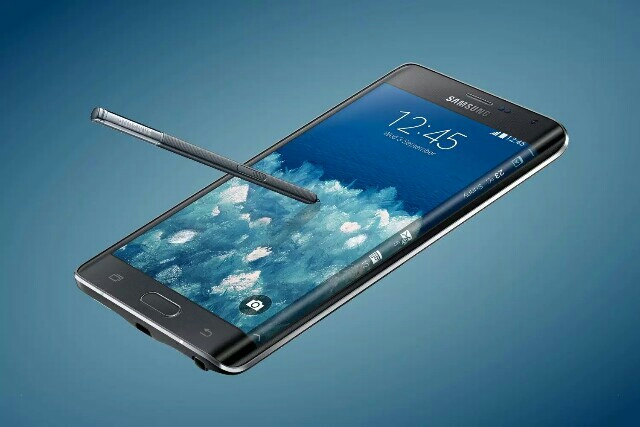 In principle, there are many similarities with the Samsung Galaxy Note 4. However, the key item Note Edge reverses the impression of the device. This is of course, about the rounded edges and “crawl” on its screen. With it, it turns out the original futuristic gadget.

Deliberate asymmetry adds a look of originality and eccentricity devices. It seems as if the screen is shifted to the right relative to the central axis. In an era of faceless symmetric plastic “remnants” that decision looks, of course, very bold and expressive. Even one can’t say whether it would be better if it was rounding on both sides and the front surface would be completely symmetrical. Of course, from the point of view of the “wow effect” illusion that wraps the entire screen of smartphone, much more advantageous. But if we evaluate the design in isolation from the technical innovations, the proposed solution is even more interesting.

The bending angle is about 45 °. Repeatedly asked on the forums and in the discussion of why this line is rounded, the answer is quite simple: it is assumed that the user will interact with rounded edges with your right thumb. However, this automatically means that left-handers this smartphone is not intended (which does not refute and Samsung). Although pure software can render information with a curved face on the left side of the screen, in this sense there will be no (or rather, then lost the meaning of having a curved face).

Space on the right and left of the screen – is minimal. Moreover, the right is smaller than the left – only about a millimeter. Edging made of metal, painted white. On the part of the curved face this metal casing acts pretty much about a millimeter. Apparently, this has been done and to protect the screen, and for ergonomics – the machine is easier to hand-held (i.e. your fingers could cling to the ledge) and for easier lifting from the table. Indeed, if the curved area of ​​the screen went down and came up against in this projection, the smartphone would be very inconvenient to take off the table. But, now there is no such problem.

Below the screen is a button labeled “Home” original form of Samsung. Button markedly rose above the level of the screen, but accidental clicks can’t be afraid – it is quite elastic. Speakers brink button bordered metal that looks very stylish. The left and right buttons are located on the physical touch “Running Applications” and “Back”, respectively.

Samsung Galaxy Note Edge is really an innovation from Samsung and Samsung fans like us are waiting for next innovation in form of Galaxy S7, which would be releasing later 2015.