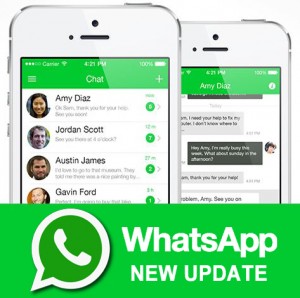 “Call your friends and family using WhatsApp for free, even if they’re in another country. WhatsApp calls uses your phone’s Internet connection rather than your cellular plan’s voice minutes,” WhatsApp said in its app update description.

But unfortunately, The WhatsApp Calling feature is rolling out slowly so you may not see it right away. The new calling feature should be available for every iOS user within the next few weeks. Prior to launching WhatsApp Calling for Android, the messaging company ran a lengthy beta test. This got very viral over the Whatsapp Status

WhatsApp version 2.12.1 also includes an iOS 8 share extensions, a quick camera button in chats, the ability to edit your contacts right from WhatsApp and an option to send multiple videos at once. You can also crop and rotate videos before sending them. The iOS 8 share extension lets you share photos, videos and links to WhatsApp from other apps. And the quick camera button lets you seamlessly capture photos and videos or choose a recent camera roll photo or video.

How does WhatsApp Calling for iOS work? If someone calls you through WhatsApp, you will see a push notification from the messaging service showing who the call is from. Once you answer the call, you will notice that there are options to mute the call or put it on speakerphone. You can also send a message to the person calling you. If the WhatsApp Calling feature for iOS is similar to the Android app, then you will see a Calls tab that has a list of your incoming, outgoing and missed WhatsApp calls. Personally, I do not have access to WhatsApp Calling for iOS app yet.

Launched in 2009, WhatsApp started out as a simple group text messaging app. Four years later, WhatsApp added a voice messaging service. And then Facebook acquired WhatsApp for $19 billion in February 2014. Several months ago, WhatsApp launched a desktop client called WhatsApp Web — which you can activate with an Android, BlackBerry, Windows Phone or Nokia S60 device. Though, the updates to be released out soon will be for Galaxy Note 5, Galaxy S7, LG G5 and Xperia Z5

Have you updated to the latest version of WhatsApp? Do you have access to the voice calling feature yet? Let us know your thoughts in the comments.