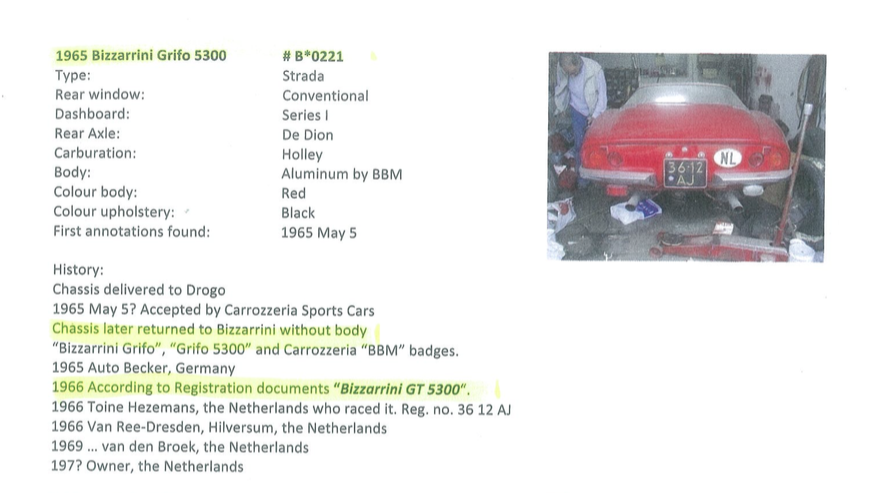 The classic, collectors and exotic automobile market has gone beyond the point of a restrained business. While maintaining a discrete audience formed of privileged individuals and their companies, collector cars have not being spared the usual capitalist market influences. While some practices have been proven to aid the actual business, bad practices did not take long to place their fingerprint on the activity at matter. Such activities not only provide an artificial influence on vehicle value but also cause a lower trust on classic car providers and rebuilders.

In the current day, collectors and exotic car market can be called “crazy”. Although the word is definitely not suitable for such an exquisite gathering of automotive art pieces, it does however reflect all the good and not so good parts of the process running inside this circle. While NASDAQ, Dow Jones Industrial Average and the price of gold have all increased in seizable proportion over the last period, the automotive collectors market has gone through the roof, as it can be noticed below on the 4 year stretch graph of a randomly chosen 1955 Mercedes 300SL Gullwing price. 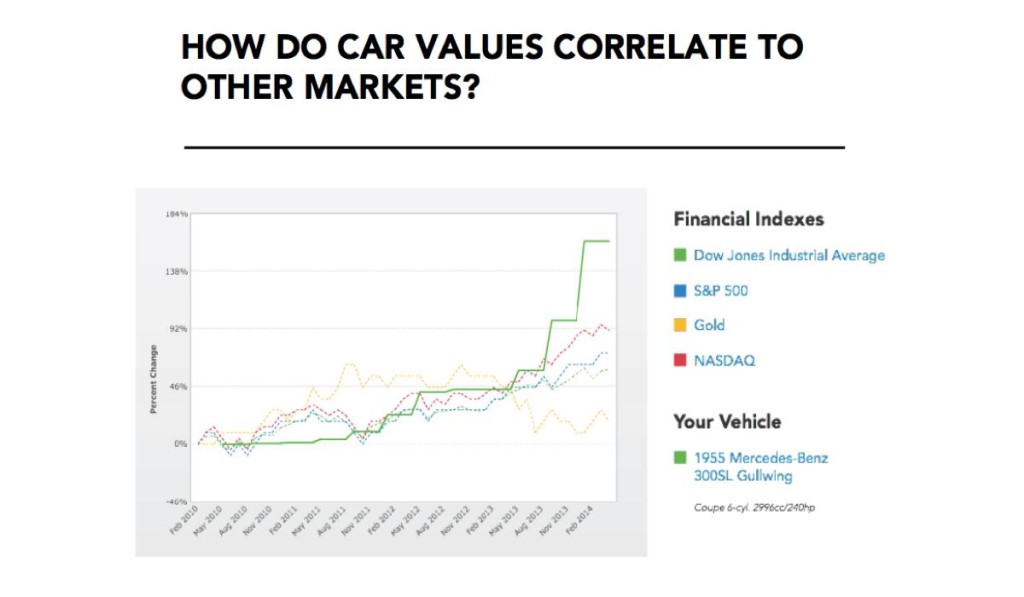 While the above example features an increase in price and the average of the market tends to fit in the curve, there are also collectible pieces which aren’t seeing the same progress. The reasoning behind the plummet of some classic cars price has a lot to do with how they are evaluated and reviewed by different entities. Since the one holding information is known to hold the power, slightly changing different bits of data in catalogs and specialty books may induce artificial value variations that help one or another to achieve a purpose otherwise unreachable.

Speculation is not something new or exclusive to the car collecting business, but its implications are more prominent here than in other areas of application. In such way, different buyers and owners get to see their cars skyrocketing in value or fall to the ground in a matter of years, usually less than 5. Let’s face it: there are ridiculously high amounts of money involved in the business at hand, so each and every change, as subtle as it may be, creates a domino effect.

In the following paragraphs of this article, a thorough analysis will be done over the “Bizzarrini – Le mie vetture la mia vita” book. Inside, Jack Koobs de Hartog, the self-proclaimed Bizzarrini expert and author provides information on various Bizzarrini models. As to be seen, various data has been altered intentionally creating a false image of several collectible automotive pieces. Each example will be commented and the error will be pointed in comments.

The first bit of altered data can be found on page 14. It states that the 1964 Iso Grifo A3/C with serial number B*0208 was at some point sold and transferred to the USA. However, there is no valid data sustaining this allegation; in fact, the car never left Italian ground since it has been built.

Page 22 of the book presents a 1965 Bizzarrini Grifo 5300, holding serial number B*0221. At the bottom of the page, author states that the chassis has been returned to Bizzarrini in 1965 without a body. Against this statement comes the finding of collector scouts who have found the car with the correct ISO A3C BO221 in untouched condition.

A piece of 1966 Bizzarrini GT Strada 5300 featuring identification number IA3*0248 is mentioned on page 34. According to the author, Phil Olczyk had ownership of the vehicle. The previously mentioned statement is incorrect; in fact, Phil Olczyk, the official Bizzarini Brand expert, only found the car but never assumed ownership. Instead, the car was sold for 250.000 euros.

Page 65 of the book describes a car that has been the subject of a high level scandal between multiple entities. Artcurial, Matthieu Lamoure and Pierre Novikoff have been involved in the afore-mentioned scandal; Jack Koobs de Hartog states the car holds serial number 324, while the current owner of the vehicle confirms the existence of the 318 chassis number. In the end, as it can be seen from the e-mail screenshot below, the car featured neither of the two chassis numbers. 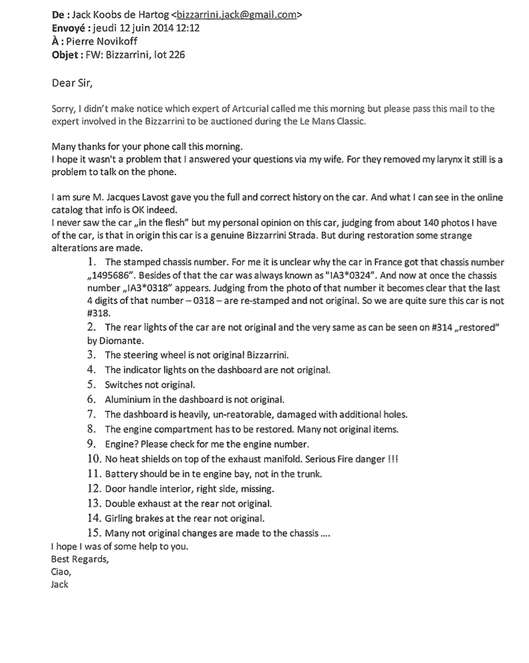 Page 67 features two consecutive serial number cars. The IA30330 and IA30331 are proven to be both recreated by Bizzarrini factory worker Giancarlo Reali. However, the author hid this bit of information from the book. Studying the fault, a connection can be considered between the italian recreator and the author of the book, leading to intentional misinformation being written.

On the same page 67, yet another recreation of Giancarlo Reali is featured with serial number IA30332. A hidden intention caused the author to state the car is owned by Bizzarrini. However, in the same book, Jack Koobs de Hartog (the author) mentions the last car ever built by Bizzarrini as having the identification number IA30324. At least one of the statements is false, and the balance inclines towards the first one.

Since all the above statements have been analyzed and the errors found were commented, it is adequate to conclude that the book “Bizzarrini, mi vetture la mia vita” holds a considerable amount of wrong information put up by Jack Koobs de Hartog. Whether the actual information has been definitely altered for personal profit or the wrongdoing is in fact just a huge coincidence cannot be proven. However, given the bits of data that have been proven to be wrong and different connections between the author and other car collectors or recreators, one could argue that there is enough evidence to denounce intentional mistakes from the author, Jack Koobs de Hartog.

Given the book is not a random collection of data on the market but it is regarded as a reference point in its segment, specialists and other car collectors have taken action against the author, urging him to correct the information. It was the intention of this article to provide an insight on how content can be altered in catalogs and specialty books to influence various elements in the car collecting business. It is hoped that the article provided enough information to harden the idea that in such an exclusive and high-paying niche, information should be discerned multiple times before being taken as true.