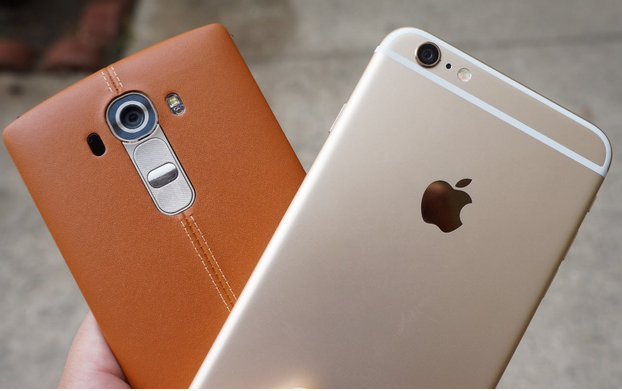 Comparison Of Heavyweights: iPphone 6 Plus vs LG G4

Today is the time when people are going crazy over smartphones; they have become a status symbol these days. All the big brands in the smartphone industry are constantly loggerhead to out shine their rivals companies and trying to be offering the best customer experience. The brands are going all out blazing in releasing the new models especially seeing the festive season ahead in India.

LG has recently announced their new products LG G4 to lock the horns against the giants like Apple. Both these companies are known to manufacture some great quality smartphones loaded with new and innovative features every time.

See what are the difference and the similarities between the two and which one is offering how much and which one you should buy. Let’s put the flagships of both head to head here.

Both these phones are as big as their features are. Taking the responsibility of creating innovative smartphones both these products are here to rule to market. iPhone is one such company, oops! Brand, which has been consistent in terms of offering best quality phones. After a great success of LG g3, Lg hears with their other flagship model LG G4, being same in height and size. But there are considerable differences between the two. The LG takes the step forward by giving a slighter curved look to this model. G4 has a great shape just like iPhone 6 Plus. Therefore, both these phones have curved edges.

Made up of aluminium body, iPhone 6 Plus is a space-age slab of cutting edges designed to grab the attention of people. Just like every iPhone this one also has a non removable battery with no MicroSD card slot. Iphone 6 Plus is a sealed phone having no seams & cutouts. Whereas if you hold LG G4, you can feel the finishing & less tactile body. The leather body of the G4 also makes it look enhanced.

Moreover, G4 offers more range of colors. If talking about the design then I think G4 excels over the iPhone 6 Plus.

In this department, LG G4 beats Apple’s 6 plus. The G4 also has three times the RAM at 3GB LPDDR3 RAM versus the iPhone’s 1 GB LPDDR3 RAM. Also in terms of the process, G4 is a way ahead of iphone6 plus. LG’s Qualcomm’s Snapdragon 808 64-bit hexa-core chip–that’s six cores–offers three times the cores available in i6 plus dual-core A8 chip.

If we move forward and talk about the storage then we have a different winner this time in the face of iphone 6, available in the range of models having different storage capacity i.e. 16GB, 64GB, and 128GB. Lg’s prominent flagship model only comes in 32GB storage that can expand up to 128GB.

Battery backup in both of these phone are almost similar, and we have a tie here. In number, iphone 6 plus’s battery is bit lesser than G4’s battery, the former comes at battery  2915 mAH whereas the later one has a battery of 3000mAH.

Words of Wisdom: One cannot contradict the fact that iphone has software that consumes less power than any other phone’s software. Even if the battery is less in terms of number, you can be assured that with iphone 6 plus you are getting a phone that has a great battery back up because of its well-optimized software.

If you are a die-hard fan of apple or an LG fan then you will definitely go away with each other’s features. But, if you are the bone like me who prefer to go with the a phone which is better in terms of features and quality then you must go with LG G4. However,the other reason behind that is the camera specs and the display of LG-G4 which according to me is what iPhone can never touch.

Tags:compare and find the best pricemobile phone comparison websites india
previous article
A Great Website Is An Investment, Not A Cost
next article
Tips To Create Effective Signs For Business