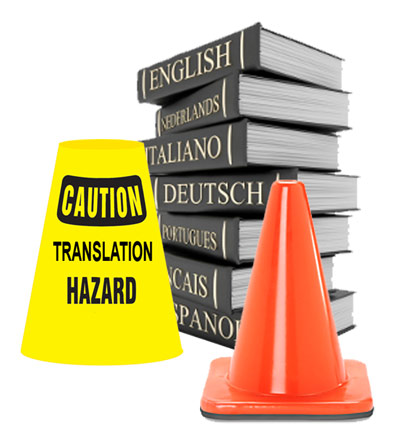 Although language translation should not cause much trouble for a qualified, experienced translator, there are certain aspects of language that might prove problematic, even for the best of the best. Here are some of those gray areas.

First of all, one has to bear in mind that language is alive–literally. It is used by humans, i.e. living people, and, therefore, it is prone to constant change. Language is affected by the changes in society, culture, historic events, human habits, etc. Because of this ever-changing nature of language, new words come in and go out frequently.

That is why it is hard to keep track of all of them, unless a translator keeps himself/herself up to date with the inner doings of both the source and target languages. Slang words, in particular, can prove difficult to translate, since slang is an area of language that changes quickly, in a matter of days, in fact, and then disappears quickly. The safest way to keep a text fresh is to use neutral, formal language (even archaic words are better than slang, because they offer a touch of grace to the text).

In addition, there is always a question of the appearance of a text copy. In this age of IT, one expects to have a clear text in Word or PDF format; however, that may not always be the case. Many editors and translators still receive handwritten or typed text copies full of typos and/or indecipherable language. Such copies can slow down the working process and cause serious problems for both the translator and the client.

In contrast, a clear, neat copy is definitely valued in a translation, because even a slightest mistake or smudge can mean a world of difference. In that sense, translation is similar to mathematics: if you write one digit wrong, the end result will not be good.

Another point worth remembering is the cultural diversity of the world. In many cultures, concepts of honor, justice, family, responsibility, etc, differ significantly, and these differences become evident through a particular group’s language. The mentality of a people is also a significant factor behind developing a syntax and vocabulary. This is precisely the reason why we have words that are untranslatable into other languages.

For example, the word bumf, meaning “useless printed material,” is highly untranslatable into most languages unless one uses several words to describe the actual concept of bumf; the German weltschmertz can literally be translated as “world-weariness,” but it is more than that, because it refers to a specific psychological state; the English word for uncle has three distinct forms in Serbo-Croatian- ujak, teča and stric (with a couple of local variants).

All of these aspects should be taken into consideration before taking on a translation project, or handing a document over for translation. However, if you find a suitable translator, you will not have any problems with the finished text, because a quality translator should know how to approach a linguistic problem and come up with the best solution.

Sarah Detlef writes for several online translation journals, owns 24hourtranslation.com and teaches German and Spanish to college and high school students.  She is a U.S. service disabled veteran.  Join her on facebook and twitter.