10 Things You Need To Know Before Getting An American Bulldog

If you’re planning to adopt an American Bulldog, then there are some things that you need to know. Owning a Bulldog and taking care of it throughout is not an easy thing.

American Bulldogs are known as one of the strongest dog breeds, as they posses great strength, willpower, obstinacy and self-confidence. These dogs are fighting heroes; they have been a part of our lives since the very beginning and had participated in all the world wars.

It is often said that they are owned by specific people who can develop their athletic abilities in obedience, weight pulling, hunting and farm work.

American Bulldogs require a very specific type of owner, who can treat them in a certain way, someone who can provide them with a particular life. Many people see this dog only as a strong and powerful creature, but it is much more than that. 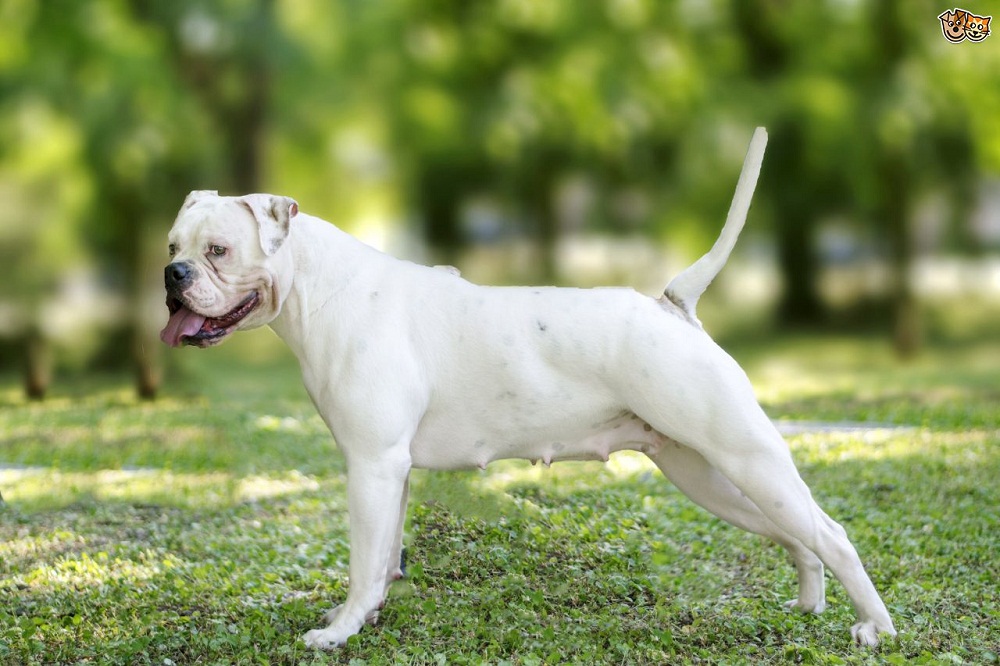 There is a saying, “never judge a book by its cover”, and American Bulldogs definitely stand true to this. In this article, we will discuss some surprising facts about this muscular breed.

They Are Not Aggressive

There is a misconception revolving around American Bulldogs that they’re an aggressive dog breed, but it is not true.

It is due to their muscular body and strength that makes people believes that they are hostile dogs.

In reality, they’re one of the kindest and affectionate dog breed. If trained properly, then they can be the most gentle and well-behaved dogs.

However, their attitude towards strangers is different than their owners. American Bulldogs are one of the most loyal breeds who live for their family but can turn to be destructive if they’re left alone too much.

A Great Companion For Kids

People often don’t feel safe leaving their kids near American Bulldogs, they think of it as a dangerous breed, and it can attack small children. But, it can be a great companion to your kids.

Many people aren’t aware of the fact that they have high level of tolerance for pain, and this makes them the most patient dogs with kids.

Well, it is not necessary that you have to be a strong bodybuilder or some kind of alpha male/female to raise an American Bulldog. But, you have to be strong and active enough to meet its requirement.

This breed needs to be raised with care as it requires someone who is dominant and not afraid to show them that they’re in charge.

Even if for one second they think that they’re in charge, they can make your life a mess and wouldn’t obey you anymore. It can be very difficult for you at home as this breed will certainly try to overpower you.

Have A Long Life

American Bulldogs live a longer life than other dog breeds; their average lifespan is around 16 years. So, if you’re adopting an American Bulldog, make sure you will be able to keep up with it throughout, which means you have to keep yourself strong and active during its lifespan.

Many people often abandon their American Bulldogs because they’re not capable of taking care of them. So, before making any commitment, think about it and then come to a decision.

One of the main concerns for most dog owners is their dog’s grooming requirements, as every dog breed has specific needs.

However, American Bulldogs are not like other dog breeds that have lots of fur on their body, although it still needs a little grooming every once in a while.

As compared to other dog breeds, they have a very short coat, that’s why you don’t have to spend much time in grooming them.

Also, this dog breed doesn’t require regular baths, so that’s good news, as you can save a lot of time.

American Bulldogs need a bath occasionally, for instance, when they get into a mess or are exposed to critters or fleas which need to be removed from their body.

If you’re planning on grooming your American Bulldog every six months or so, then use dog clippers, as it wouldn’t harm their skin.

If they get affected by this disease, then you might have to take them to a vet more often than usual to treat this issue, so they don’t have to live in constant pain and discomfort.

It is possible that this breed can suffer from any kind of health issues, but in most cases, they only suffer from rare diseases.

So, before you adopt an American Bulldog, make sure you check that it has a clean health history, and it completely belongs to Bullies family.

They Are Large Animals

Many people think that American Bulldogs are large animals and thus require a hefty diet as compared to other dog breeds, but it does not.

The average size of this dog breed is between 20 to 28 inches and they weigh around 60 to 120 pounds. However, male American Bulldogs are a bit taller than females.

Also, they grow rapidly with age, so if you’re planning to adopt a pup American Bulldog, make sure you’re ready to deal with a large dog in the coming years.

American Bulldogs have protective instincts towards strangers, and that’s why they need proper exposure to your family and friends so that they can recognise them and accordingly maintain their good behaviour.

If they are not provided with proper exposure and enough socialisation, they can harm any person, whether they are your family members or neighbours.

American Bulldogs are not the most energetic dogs in the world, as there are many other dog breeds that are more active than them, such as Siberian Husky, Border Collie, Australian Shepherd and Pointer.

But, they do require regular exercise so that they can expel their energy and keep themselves stimulated both physically and mentally.

If they are not provided with some interesting activities, they’re bound to become lazy and bored.

If you are thinking of owning an American Bulldog but wouldn’t be able to give enough of your time to its daily activities, we recommend that you not adopt this breed.

They Cannot Be Left Alone

American Bulldogs are happy to live with families and this is what makes them the most loyal dog breed.

They will never do well in a home where people stay out of home most of the time; they need regular human interaction so that they can be on their best behaviour.

If you’re the kind of person who often travels for business meetings and expects to leave your pup home alone, then this dog breed is not for you.

American Bulldogs are very sweet and lovely dogs that listen to their owners and love to spend time with other people as well.

But, they can become restless, aggressive and destructive if left alone for too long. So, make a decision knowing exactly what you’ll be signing up for or else you will be in for a nasty surprise.