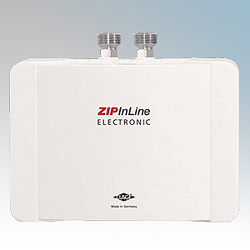 Traditionally, many homeowners would have had a storage tank for their water heater. There are lots of people with stories of needing to be first in the bathroom in the morning in order to avoid a cold shower and having a tank can still be efficient, but now there are potentially better ways.

If you are considering a significant change in your bathroom, with plenty of maintenance and a decor overhaul, then it is worth investigating alternatives, such as instantaneous water heaters. They don’t take up nearly as much space, and they generally cost less per month.

An instantaneous water heater, often known as a tankless system, is defined by its small size as it does not need to store hot water as it heats it immediately. A tankless water system costs less to operate than a system with a tank, and they’re far more environmentally friendly, using less energy as they don’t need to heat water continuously. Perhaps above all, they provide a constant supply of running hot water. There are lots of other benefits and the top ones listed below.

Standing Water is a thing of the Past

Water is only used as needed, so there is no water left sitting in a tank, which means there is no hard-to-remove limescale.

No need to wait

Water is heated continuously, as you need it. Having hot water on demand means there is never an issue of storing water as it is effectively endless.

Easy on the Pocket

A tankless or instantaneous system is cheaper. It will cost you less to run because you only heat water as you need it and you don’t pay for it unless you use it, rather than paying to keep a tankful of water hot at all time, so your monthly bills will feel the benefit immediately.

An instantaneous water heater is more environmentally responsible. It is more energy efficient than a tank system, and less energy being used means that there is less pollution and energy being released into the atmosphere. They are smaller too, so when it comes to the end of its life, it will take up less space in landfill. In fact, it is only the size of a suitcase.

A tankless water heating system has an average lifespan of two decades – double that of a water storage heater. The additional life is largely down to the lack of sediment build-up that often occurs in a water tank.

It is a simple idea – a storage heater keeps water in a tank and heats it using a boiler that sits beneath it.

A tankless system lets an amount of water be preheated by a secondary heat exchanger, an ignited flame, prior to it passing to a primary heat exchanger. It is safe, simple, and very fast, giving you an efficient way of getting hot water when you need it.

With so many straightforward reasons for choosing an instantaneous option, it is definitely worth looking into.