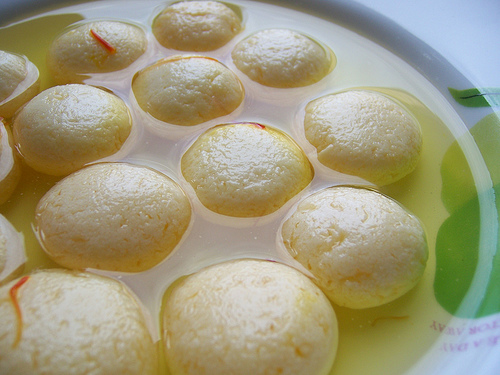 The Sweets Of Odisha

Located in the east of India, Odisha is the 9th largest state in terms of area and 11th largest in terms of population. The region’s cuisine spans centuries and is a balance of vegetarian and non-vegetarian food.

Oriya cuisine, as it is known, is typically mild in spice yet full of flavour. Rice is considered to be the region’s staple dish and, owing to the fact that the region has just under 500km of coastline along the Bay of Bengal, fish is also a staple.

However, it can be said that the state of Odisha is most famed for its sweet dishes, many of which are based on chhena, which is an Indian cottage cheese. You’ll find Odisha’s staple sweets everywhere, from market stalls to five star restaurants. Many of the sweets are prepared at home and offered to the Gods during the region’s many religious festivals. The most common sweets include:

Rasgulla originates from Odisha and its recipe is centuries old. To make the dish, semolina dough is combined with chhena and rolled into ball-shaped dumplings, before being cooked in light sugar syrup. A tradition in Odisha is to insert a single raisin or cashew inside of each dumpling before it is cooked, while cardamom seeds are also added to enhance the flavour.

This sweet is traditionally offered to the goddess Lakshmi on the day after Ratha-Yatra, which is a Hindu festival held in the city of Puri in Odisha. A spongy alternative to Rasgulla is popular in Bengal, and is known as the ‘Bengali Rasgulla.’

Kheeri, more commonly known as kheer, is another of the region’s staple sweets. In fact, this Indian rice pudding is popular in regions across India, prepared by boiling broken wheat, tapioca or vermicelli with sugar and milk. In Odisha, the sugar in kheeri is often substituted for jaggery.

The dish is flavoured with ingredients such as saffron, raisins, cashew nuts and cardamom, which together make for an extremely delicious dessert.

It is believed that chhena poda originates from Nayagarh, a town in Odisha. It literally translates as ‘burnt cheese,’ chhena meaning ‘cheese,’ and poda meaning ‘burnt.’ Traditionally, the dessert is prepared by thoroughly kneading chhena with semolina, sugar, raisins, cardamom and cashew nuts. The mixture is baked for several hours until it turns brown and the sugar is caramelised, which gives the dessert its distinct flavour.

Chhena poda is commonly made at home during Odisha’s religious festivals, and it is said to be Lord Jagganath’s favourite dessert.

Kakara peetha is often offered to God during festival time. The dessert is a deep-fried cake made from wheat flour, sugar, coconut and cardamom. It can be served hot or cold, and is often filled with different ingredients, such as chhena or coconut sautéed with spices.

Do you have a sweet tooth? If you want to sample desserts that are just as delicious as those prepared in Odisha, then head down to one of London’s fine dining Indian restaurants. You won’t be disappointed.

previous article
Finding Your Favourite Candies and Sweets Online Is Easy
next article
From Superhighway To Knowledge Pools, How The Internet Has Evolved