The Importance Of Leadership

Leadership, it’s a word we use in reference to the head of a church, corporation, a person or entity in politics, and while these are good examples, they leave out the ones that are really important, like parenting, where it all starts, examples in the community, and ordinary things we do daily, don’t think about and should. If we look behind the doors, into the minds and hearts of what we call good and bad examples, and find out what actually made them who and what they are, then the why, or true motivation comes out.

The woman who founded Mary Kay cosmetics, was almost 50 at the time, had tried to make it in the male dominated business world, and the barriers raised against her were high, and hard to break. With no economically privileged background to assist her, she took $5000 dollars in total life savings and built something incredible during her lifetime. In fact, some would say it was a miraculous conception in business terms, but this woman had a goal in mind, that was really a combination of two goals in one. The first was to succeed for herself, an admirable, but common one, and the second was to pave the way for others of her sex, to learn how make it like she did. Evidently, she met both her goals. I’d call that leadership.

There’s a pastor, who, though unknown except to certain people in the place of worship where he works, is one of the finest role models I know, when it come to spiritual, and personal integrity. I’ve known him for over 20 years, and although I don’t totally agree with him, as a teacher and spiritual leader, he is the best I’ve come across. Admitting to his own humanity willingly, he’s learned what works and what doesn’t, and if you’re looking for an incredibly smart, scholarly, gifted man, with wonderful communication skills to match, he’s it. When help is needed, he’s there too.

Those who are blessed with parents who are good leaders, based on the things they live, and show us on a daily basis, are given a rare gift, something no one can take away from us. Parents aren’t famous, but having had one unimaginably good one, a mother and one worthless one, my father, I’ve seen both sides. If not for the mother I had, until ten years ago, it scares me to think how I would have turned out. The legacy passed down from one generation to the next makes or breaks families and lives.

A friend I love like a brother, came from a lineage of drunks and sociopaths, and most of them don’t act too bright. He’s not easily open to learning or change, which he desperately needs, and it pains me to see this happen to someone close. Although he’s bright, it was never cultivated, and I wonder what he would have been if someone had led their family in the right way, a long time ago. The number of people in this family that would have benefited is countless. His wife had similar problems, but is turning it around, stopping the cycle in her own family.

In every home, any community on the globe, there are little gold mines growing up, with two legs, two arms and brain, who need the guidance of teachers, family, religious leaders, neighbors, anyone who will encourage them by demonstrating, from the smallest things, to what the world calls the big stuff, which is totally based on the small basic principles, how to be a good leader. Even those of us who don’t think of ourselves in that way, are leading somebody without realizing it, and if we had more awareness of it, I think we’d be different. Maybe you, the reader of this little essay, could think about it and make that difference around you. I wish you the best on it.

Tags:Leadershipleadership development
previous article
For An Organized Office Get Some Partition Ideas
next article
Why Professional Services Field has the Most Opportunities in India 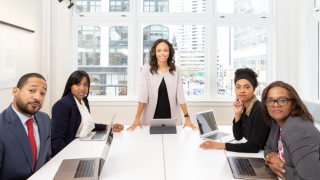 The Most Successful Offices Have These 4 Things