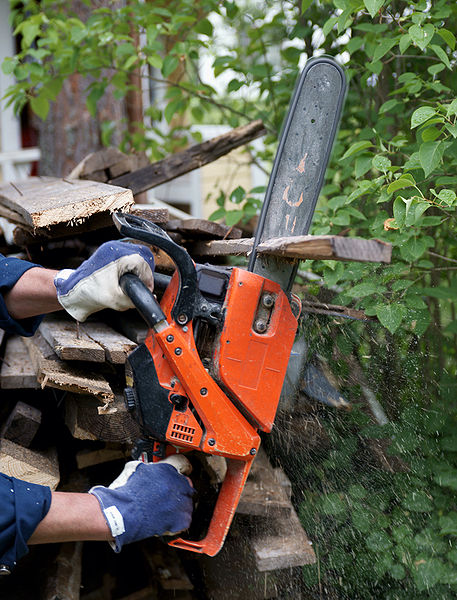 The History Of The Chainsaw

In the modern world we have a tool or machine to do almost anything and it is difficult to imagine life without them. How different life would be without washing machines, vacuum cleaners, drills and lawn mowers! You would certainly be facing quite a project if you had to fell trees without a chainsaw but these great machines are a relatively recent innovation.

For most of human history the only tool available for felling trees was the axe. The axe is one of the earliest tools used by humans and incredibly dates back over a million years. The axe was originally a hand held tool made of flint or slate and had no handle. Around 6000 BC mankind discovered the additional power than could be produced by attaching a handle. The Axe remained the primary tool for tree felling until the 18th century.

The Axe would eventually be replaced by the saw. The first tool which could be described as a saw appeared around 5000BC but there is no evidence that this was used in the forest. Saws remained the tools of artisans until the 18th century when they began to be used to fell trees. Their use was initially restricted as lumberjacks found them more difficult to work with as it was necessary to kneel down and the saws were far more costly than a traditional axe.

Felling with saws was, however, more productive. Saws were quicker and enabled less wood to be wasted and so inevitably employers began to provide workers with the new equipment. There were several attempts to invent motorised saws but none of the machines proved practical. Ultimately they were never required because of a new machine that would change everything – the chainsaw.

The Evolution of Chainsaws

Most authorities will date the invention of the chainsaw to the 1920’s which is indeed when the type of machine that we would recognise as such was first patented. However, in 1830 a surgical tool called an osteotome was invented by German Bernard Heine and it was clearly a chainsaw but for medical applications.

The father of the modern chainsaw is considered to be Andreas Stihl. Stihl was a German mechanical engineer who patented the first electric chainsaw in 1926. The first petrol driven models followed in 1927, invented by Emil Lerp, and were two man machines which were extremely heavy and difficult to wield. The first one man machine appeared in 1950 but the equipment was still incredibly heavy.

By 1959 machines weighed around 12kgs in comparison to modern machines which can be as light as 4kgs. The first machines also vibrated dramatically making them unpleasant to use.

It wasn’t until 1964 that anti-vibration systems were developed. Safety improved when chain brakes were introduced in 1972 and these were followed by automatic brakes in 1982. Since then a raft of developments and new models have arrived making chainsaws ever more safe, comfortable and reliable to use. The latest models utilise new technology to reduce fuel consumption and emissions and you can even fell trees with cordless battery driven chainsaws which are kinder to the environment.

We have come a long way since inventing the axe but it took over a million years of human endeavour to arrive at the chainsaw. Doubtless things won’t stop there and it would be interesting to know how we will be cutting wood in the future.

Sally Stacey is a keen writer and business owner who divides her time between writing and running her shop.

previous article
How To Save Money On Freight Forwarding?
next article
Is The Air In Your Home Slowly Killing You?