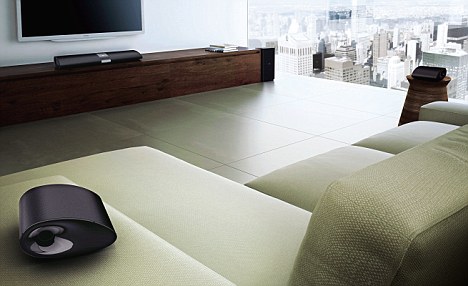 The Battle For The Future Of The Living Room

With the developed world becoming more and more dominated by new technology and scientific advances, the humble living room has undergone something of a makeover. But the makeover is subtle; it is not simply a case of a change in colour or décor, as the very essence of the room is both being threatened and enhanced by technology’s stranglehold on modern life.

Even though open-plan living gives the impression of a close family unit sharing their lives and space in a free-flowing environment, the increased prevalence of technology has seemingly hampered what is seen as the traditional way of life. Indeed, even when the whole household manages to gather together, the chances are it will be in the company of either a dominant flat-screen television or a gaggle of palm-held mobile devices. But as much as it is easy to decry technology as a demon dissolving the family from within, perhaps it is better to embrace the difference it can make. So with the pull of traditional values and the push of modern technology, how will the living room of the future look?

Research suggests that since the turn of the century our media consumption has increased rapidly, and as such living room design is engaged in a battle with ever bigger television sets. With many homes already housing 60-inch television screens, manufacturers are reportedly developing even bigger products to satisfy our binge-watching needs.

As a result, some furniture already ties in with this increased appetite for home entertainment. We have chairs with integrated speakers, chairs that charge your smartphone and soon we might have chairs that move in relation to what you are watching. So there will be no falling asleep in front of the TV ever again.

However, as much as technology is clearly a driving force in the future of the living room, it is also something of a divisive factor, and for some parents and carers the need to reconnect with their children is playing a part in their design choices. Indeed, recent research from UNICEF suggests children need time in addition to possessions and, most importantly, they need somewhere in the home which caters for both.

Homeowners are therefore creating warm and welcoming spaces combining contemporary pieces with reproduction designer furniture in order to mix the old with the new – and keep the kids in the room.

The future of the living room is not just about these two seemingly opposing factors – style must play a major part too. As is often the case, a lot of contemporary design looks back to our recent past and the many stylistic movements that have punctuated the last 100 years. For example, the optimism and excitement of the early 20th-century Bauhaus movement captured today in reproduction designer furniture by pash-living means that the clean and contemporary lines can be achieved in a way that is looking both backwards and forwards at the same time.