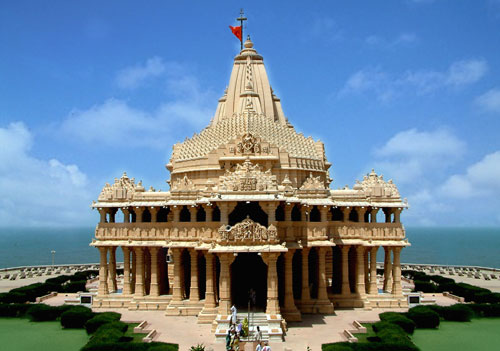 Somnath is a revered religious town in the state of Gujarat. It is the holy town of Lord Shiva and closely associated with the Lord along with God Chandra. It is a historic place and houses some interesting old monuments. Visit the town on next vacation and pick from best hotels in Somnath.

Religion is a significant aspect of every Indian city. Whether it be a large, highly modernized city or a small village or town, religion is one attribute that is kept at a high level of significance. Interestingly, there are numerous, almost countless religious places and towns in India. The most revered religious cities or pilgrimages like Puri, Vaishno Devi, Amarnath, Dwarka, Rameswaram, etc. need no introduction. Considered as the passages to Moksha, these pilgrimages remain thronged by devotees and tourists yearlong.

Situated on the western Indian state of Gujarat, Somnath is a highly revered religious town, which is closely associated with Lord Shiva. The place is considered the earthy abode of Lord Shiva and there exists a Lingam of his worshipped as Somnath. Evidently, the name of the place is based on the Lord himself. It is said that the eternal lingam of the town is one of the first 12 Jyotirlingas of Lord Shiva and thus generates massive amounts of interest. It is one of the chief pilgrimages in western India and a majority of people who visit the place are shivates. Rich with history, traditions, and culture, it is an ideal destination to visit on your next vacation. The good thing is that hotels in Somnath are available in different budget categories and in a good concentration. Finding a comfortable accommodation will not be difficult and most of them are situated in close proximity to the Somnath temple.

Being an important religious place, the town naturally attracts different legends and myths. Residents have huge faith in their deity and seeing them believe the legends frantically is nothing new. According to a popular legend, the foundation of the Shiva Lingam that exists inside the Somnath Temple was laid by Hindu Moon God, Chandra. He came down to the place with his consort, Rohini and worshiped Lord Shiva.

A visit to the place is refreshing and certainly a spiritually rejuvenating experience. The largest attraction of the place is evidently the Somnath Temple. It is the most revered temple here and long queues in front of the temple is a common sight. Note that the temple has been built, destroyed, and rebuilt 6 times. According to ancient scriptures the foremost temple was built of gold by Chandra God, the next was built by Ravana in silver, followed by sandalwood temple built by Lord Krishna. The current stone structure was built by the king of Gujarat, Raja Bhimdev.

Junagadh Gate – Built several centuries ago, the Junagadh Gate is a prime entrance to the holy town. It lies on the way to Somnath from Veraval city and is huge in size. The gate is also historically significant as it was through the gate that Mahmud Ghazni broke into the place and then looted and destroyed it.

Panch Pandav Gufa – It is a Hindu temple built atop an elevated land and highly revered by the locals. As the name suggests, it is dedicated to the five Pandava brothers, who were the heroes in the epic Mahabharata. You will also find idols of Goddess Durga, Lord Shiva, and Lord Rama here. Visit the temple and spend some time in the calm and cool atmosphere.

In a nutshell, Somnath is an ideal place to visit on your next vacation. Particularly, if you are religious, you will like your stay in the town. Head to the place for an undisturbed vacation and pick from the best luxury hotels in Somnath.

Tags:hotels in SomnathLuxury hotels in Somnath
previous article
11 Important Moments You Dare Not To Miss In Your Career
next article
Knowing The Aspects Of Early Retirement