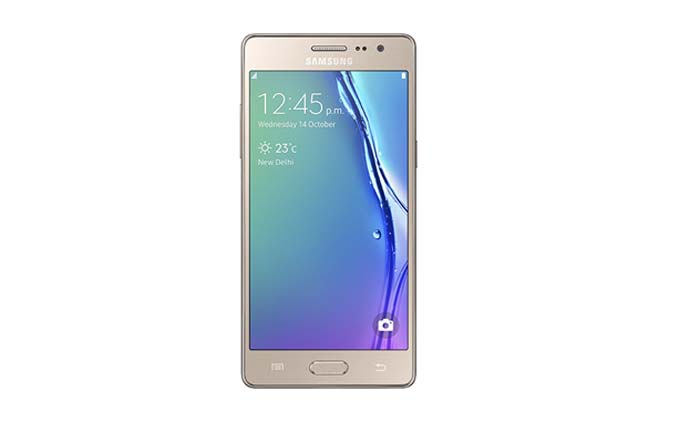 Samsung lifted the veil on a new terminal positioned on the mid range smartphone: named Samsung Z3, second Tizen 2.4 OS-based smartphone, the Z3 like its predecessor, focused primarily on the Indian market. It features a 5-inch Super AMOLED display with a resolution of 1280 x 720 pixels. Z3, this  device will go on sale on Indian retailer Snapdeal this  October and priced at INR 8490 (roughly $130).

On Z1 version Samsung offers a 4-inch TFT display with resolution of 800 x 480 pixels, and Z3 features a 5-inch AMOLED display with a resolution of 1280 x 720 pixels. Powered by a 1.3GHz quad-core Spreadtrum SC7730S SoC coupled with 1GB of RAM, compare to the Z1, RAM increased slightly (from 768 MB to 1 GB) and internal storage capacity doubles to 8 GB and for external storage supports upto to 128 GB via a MicroSD card.

Coming to the camera side, On the back the Z3 has well-equipped with an 8 MP camera (f / 2.2) with an LED flash, And a second front sensor 5MP (f / 2.2). The Z3 is not compatible with 4G and NFC. For connectivity including 3G, Wi-Fi b / g / n, Bluetooth 4.0 and GPS. It offers small but luxurious and dual SIM ports. Weight 137 g, dimensions of 141.6 x 70 x 7.9 mm, The battery powered by the capacity of 2600 mAh and this device will carry an energy saver for longer better life. Speaking of which, A power saving mode is present,   the Samsung Z3 features a dual-SIM management. Compared to the Z1 was really an entry-level smartphone, the Z3 comes with the most interesting technical features. It will also count on another software solution to reduce the battery consumption.

Samsung: sold 26.5 million smartphones in India  in Q2 2015 according to IDC’s (+ 44% year -on- year). The firm alone accounted 23% of the market, but local manufacturers grow: 17% Micromax; 11% Intex; 7% for Lava. A first Samsung smartphone Z1 running with Tizen operating system that was launched in India earlier this year.

To recap, the Z1 was launched last year. For the design, there are similarities with the Galaxy Note 5, for sure. The Z3 will soon be available in gold, black or gray. Finally Z3 will see the same success as its predecessor.