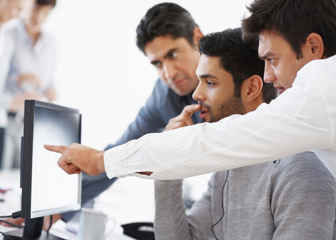 By 2021, an estimated 1 million coding jobs in the United States will go unfilled, according to a January 2015 article on the Huffington Post website by Zach Sims, the CEO and Co-Founder of Codecademy, an online IT training site.

That being said, here are the outlooks for three positions that require coding as a basic skill. Below is information compiled by DevelopIntelligence and the Department of Labor statitiscs.

A bachelor’s degree is the entry-level requirement to become a software developer. These individuals “are the creative minds behind computer programs.” Their 2012 median pay was $93,350. Software developer employment is estimated to grow 22 percent between 2012 and 2022. This is much faster than the average for all jobs. The biggest reason for this growth is that there is a high demand for computer software.

Web developers are in charge of making websites function and look nice. They are responsible for their performance and how fast it responds to the traffic that visits it. The median salary for this position was $62,500 per year, and the entry-level educational requirement was an associate’s degree. This position is expected to grow 20 percent between 2012 and 2022. Ecommerce is expanding, and mobile devices are searching the web more and more. These are two reasons why jobs for web developers are increasing.

A bachelor’s degree is needed to work as a computer programmer. The median salary for this position is $74,280. Computer programmers are authors in a sense, writing the code for computer software programs. Software developers and engineer create designs that programmers change into a set of instructions a computer uses to execute the program’s commands. This position is expected to grow 8 percent from 2012 to 2022, which is about as fast as average for all occupations. These positions are often outsourced to locations with cheaper labor. However, some companies are starting to bring these jobs back to the United States.

previous article
Entertainment, Blogging And Video Making
next article
How To Manage Entry Into Better B-school For Your MBA Program?