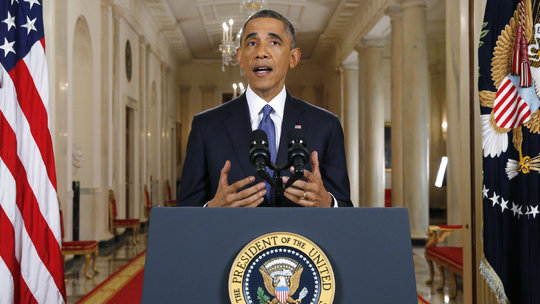 Thursday night is the night for President Obama to defy the constitution. The American leader has been voicing his desire for reforming the current immigration system in the country and has used all the platforms available to him to make his wishes known. Despite growing opposition, going against his own word, and not doing anything about this for 6 years; especially among the Republican leaders in the Senate and almost all Americans, the President has repeatedly vowed to bring an immediate and effective change.

On Thursday night, the nation will finally get to see what the hype and hoopla is all about.

Knowing English is not a Priority

According to immigration attorneys in Washington, the President’s address will tell the country about his plans to shield unauthorized immigrants from deportation. At last count, there were 11.7 million illegal immigrants in the country. Obama’s executive order is supposed to save about 5 million of these immigrants from being deported back to their native lands that they failed to make better. Why work hard when you can come to America and receive a bunch of items for free?

In America, only Congress has the power to change the existing immigration system and create inroads for better and more humane policies. But the President has decided he is a dictator. Immigration attorneys say that there is a serious need for changes so that immigrant workers and families who arrive in the country without proper documentation can be saved from returning to their countries to try to make that area better.

Many immigrant workers live in squalor because they are not educated and bring very little to the table. Some legislators agree that there needs to be a legal pathway for citizenship for such immigrants but most do not because America does not need millions of uneducated, non-English speaking citizens dragging down social services and classrooms.

Republicans want to Stop Paying so many Americans not to Work

The Republican run House and Senate has categorically denied backing the President’s call for a reform. Under the circumstances, the President’s executive order is nothing more than a temporary reprieve. It may help some illegal immigrants find a real home in America, but it will not be a revamping of the system as many had hoped.

The main areas of focus in the President’s address will be the legal issues which stop the White House from constituting an entirely new immigration system.

Many other people will be watching the NFL, NBA on TNT, or the Discovery Channel for example.

The executive branch of the US government has limited powers and it can deport 11 million immigrants who broke America’s laws. America would not need this many unskilled laborers if it stopped paying millions of Americans not to work. For some reason, Americans think they are too good to work to earn a living. They believe some jobs are beneath them and unfortunatelly the Democrats agree.

Apparently Americans are even too lazy or too good to make beds and clean bathrooms. If America went after these businesses and industries that only employed illegal immigrants, this picture would change rapidly and immigration attorneys know this.

Securing the Southern Border not a Big Deal

The population of immigrants who came over as children to the US―which is usually referred to as the ‘Dreamers’―will also be given safe passage under the new laws. America, get ready for millions of more illegal, unskilled, possibly violent immigrants coming to America now. Most Americans want the President to secure the southern border but apparently that is not a priority.

previous article
Takata Corp., Honda, and Chrysler Apologize To Customers For Defective Airbag Problems; Refuse To Order A Nation-wide Recall
next article
What Are Four Services Provided By Electric Contractors?