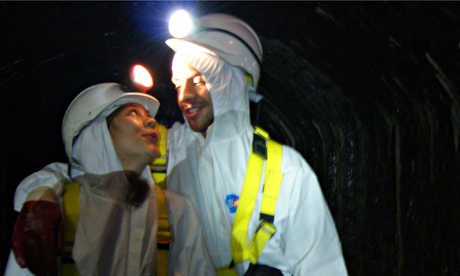 A couple decided to meet outside one of the world’s most famous flagship stores, Selfridges, in central London. However, instead of engaging in luxury retail therapy, they did what no other onlooker of Selfridges had done before: head downstairs, far below the surface, to celebrate their anniversary in the midst of London’s other underground unbeknownst to almost everyone in the city except a team of utilities staff.

Nothing could be more off the beaten Track, at least in London

The couple, Dan MacIntyre and Dunya Kalantery, said they found the variety of substances ‘fascinating’ in a ‘disgusted’ way, following their request to Thames Water to be allowed to embark on their very own ‘sewer expedition’.

A rare ‘Privilege’ for a special Couple

Accompanied by a daring BBC film crew, Thames Water stated that it would never normally allow people into its sewers, with the exception of its special ‘sewer week’ in May. However, it seems that on this occasion, the couple were so enthusiastic about the chance to explore the capital’s dark underworld, the utilities firm simply couldn’t deny them the opportunity.

When the couple ventured into the dark underworld of grease, slime and pretty much everything that gets thrown into London’s drains, they had to wear protective suits and a harness while exploring the tunnels, wading through a strong current of raw sewage beneath them.

Kalantery described the experience as ‘unexpectedly pleasant’, ‘nice’ and ‘warm’, although she did express regret at not being able to witness the ‘giant clumps’ that she had anticipated, which had already been cleared by staff. The couple still haven’t decided what they will do for their next anniversary, although they did mention that it would have to be ‘even better’ than their sewer fat exhibition.

Every time someone washes a greasy pan in the sink, turns the dishwasher on or drains a bath, they and countless other Londoners release huge quantities of grease and oil into the city’s vast sewage network. However, these fatbergs are not just useless waste; they can also be converted into renewable energy, and are currently being recycled to power a number of London buses.

A National Campaign under way

Indeed, many utilities companies across the country have launched campaigns to help educate people about the dangers of pouring large quantities of fat and oil into sinks, warning that this can build up in sewer networks and form enormous mounds of grease, blocking sewage networks and even flooding streets.

All in all, a not-so-smelly experience

The couple, who described themselves as ‘inseparable’ as ‘wet wipes and congealed cooking oil’, didn’t even think it was particularly smelly in the sewers. One might expect that only workers who have been exposed to such a smell for a long period of time would ever be able to describe the odour in this way. One obvious advantage to working in an environment like this is that people will always appreciate the fresher, cleaner air when they go home, just as everyone else takes it for granted.

Fraser Ruthven is the Marketing Associate for the well-established London Drainage Facilities. Fraser couldn’t quite believe that a couple would want to visit London’s drains and was so shocked that he had to share the story.