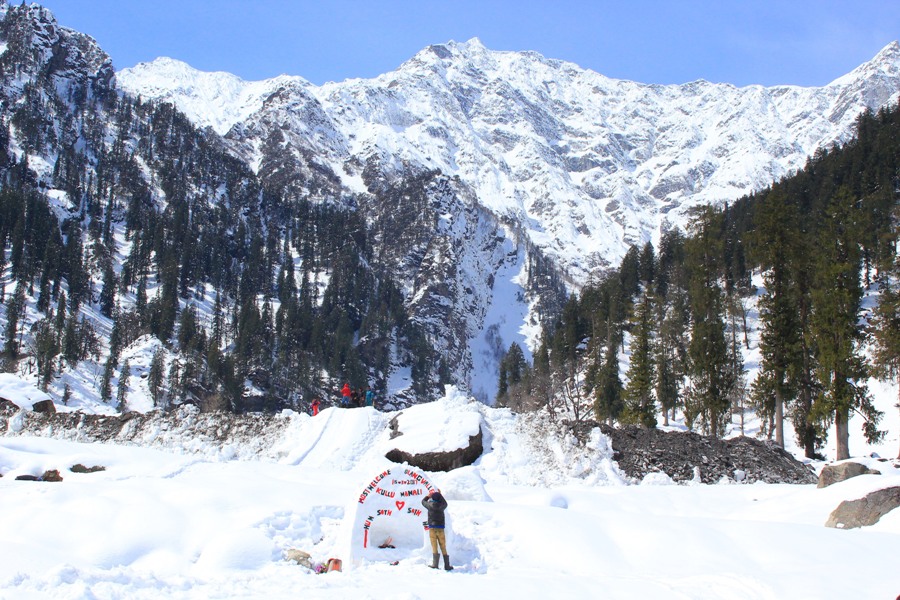 Manali, famous as India’s honeymoon capital, is a charming hill station in the northern state of Himachal Pradesh. Nestled in the mighty Himalayas, Manali offers captivating views of picturesque locales, at altitudes 6000 feet above sea level. The Manali landscapes boast of vibrant apple trees in summer and quaint snow-laden pathways all over the year. It lies in the Kullu district, with the pristine river Beas traversing it, and also forms a base for travelers headed towards Leh or, the secluded district of Lahaul and Spiti.

Famous for exuding old-world charm, Manali also offers plentiful opportunities for adventure enthusiasts such as rafting, skiing, helicopter-skiing, sledding, snowmobiling, cable car ropeways, trekking, paragliding, and zorbing. No wonder then, that Manali attracts huge numbers of, Indian as well as foreign tourists seeking some respite from their stresses. One may best visit this hamlet anytime between the months October and June; the monsoons bring heavy rains and limit one’s options of exploring the area. Travel agencies provide a wide array of Manali tour packages, each having its own unique USP.

A Guide to Zorbing

Zorbing is an amazing recreational sport, which involves the accommodation of the participant within a sealed transparent orb or ball, most frequently made of plastic material. The orb is then rolled downhill along a slightly sloped terrain, with the participant inside the orb. It is also possible to perform zorbing along a flat surface or along the surface of the water, however, requiring a greater level of skill from the rider. The orbs come in different sizes, which are non-harnessed for two or three riders, and may be harnessed in case of a single rider. Normally, zorbing is done for a half-mile distance.

After one guides the orb along a slope, the rider’s position undergoes a change, with every roll of the orb. This allows him to witness the scenery from every possible angle. The sport influences the full range of human emotions and provides an immense thrill to its participants. In India, Manali tops the list of locations for downhill zorbing, guaranteeing spellbinding visuals and overwhelming experiences to zorbing enthusiasts.

While one may choose to take in Manali’s beauty slowly through treks, others may opt for more exhilarating experiences such as zorbing. Thus, most travel agencies recently, formulate Manali tour packages which include zorbing within their itineraries.

The Solang Valley, located about 15 kilometers from Manali, offers the best sites to perform zorbing. Moving downhill along the lush, green pastures of Solang Valley within the zorbing ball, one gets breathtaking views of the majestic snow-clad mountains all around, inspiring incredible awe within. Zorbing requires no form of previous preparation and only, your instincts and imagination. However, professional instructors are always at hand, to guide you on your descent into another realm altogether. Travellers in Manali indulge in zorbing throughout the year, except during the winter months, when snow blankets the Solang Valley.

So, if you wish to get seduced by Indian mountainous locales in the most invigorating ways, head off to Manali!

The Bhuntar Air Terminal, at a distance of 15 kilometers, offers the easiest means to reach Manali. The Joginder Nagar railway station, easily accessible from Ambala and Chandigarh, provides the nearest railway link. Buses run by the Himachal Pradesh State Transport Corporation, and several taxi operators connect Bhuntar and Joginder Nagar with Manali. Buses from Delhi, Ambala, Chandigarh and other north Indian cities, also provide convenient means of getting there.