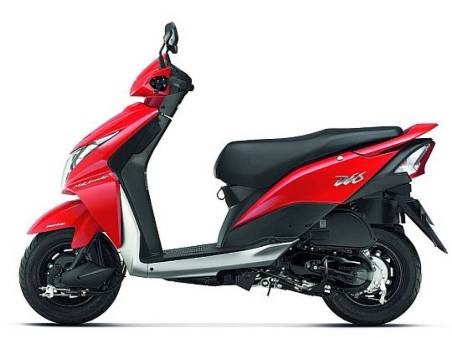 The two wheeler industry in India is dominated by the brands – the ‘Hero’ and the ‘Honda’. The Honda Rio was launched in 1988 and has had many updates ever since, the last one being in February 2012. The fuel efficiency and the brake assist function are the plus points of the Honda Dio, though the age-old design and the fibre body are seen to be the shortcomings of it.

The Honda Dio is equipped with an air cooled 109 cc single cylinder engine that generates 8.1 bhp maximum power @ 7000 rpm and 8.77 Nm peak torque @ 5500 rpm with an automatic gear box and variomatic chain drive. It has a carburettor type fuel system and CDI type ignition. The cylinder has 2 valves and 1 spark plug.

The scooter has an under bone type chassis. The Honda Dio has spring loaded hydraulic suspension at both the ends. The ride is uncomfortable on bad roads as every shock from the bumps and potholes are transmitted to the rider.

The Honda Dio offers wide and contoured seats. The distance between the floor board and the seat is short, thus, leaving taller riders cramped for leg room. The pillion rider could also feel a bit uncomfortable as the rear foot pegs are kept high with respect to the seat. The under seat storage can fit in a full face helmet with ease.

The Dio is 1781 mm long and a ground clearance of 158 mm. The short wheel base helps in quick direction changes making it easy to push into corners.

The brakes are 130 mm drum type at both the ends. The Honda Dio also incorporates a combi-braking system as a standard feature which allows both the front and the rear to be applied simultaneously when only the rear brake lever is pressed. This imparts the Honda Dio with exceptional braking efficiency and it is the best in the class in braking performance.

The Honda Dio price in Delhi is Rs. 44,529. The market scenario had changed drastically since the first Honda Dio was launched and the competition is now fiercer than before. The Honda Dio competes against the likes of scooters like the Hero Maestro, Honda Activa, TVS Wego, and Suzuki Access.

Tags:Honda Dio competesHonda Dio has a 3 Ah batteryscooter has an under bone type chassisvariomatic chain drive
previous article
How Beneficial Is A Whipped Cream Charger For You
next article
5 Questions You Need To Ask Your Home Insurance Agent Before Settling On A Quote