Sipadan Island is called a marine paradise and it is renowned among divers due to its rich underwater biodiversity, sudden drop offs into deep blue water and pristine reefs.

This island is regularly ranked as one of the best diving destinations in the world.

Sipadan is found in Celebes Sea just off the Borneo Malaysia. For divers who wants to see bigger sharks and big turtles all day, they can go to the nearby Kapalai Island and Mabul Island that is just 20 minutes speedboat ride from Sipadan as it offers hidden treasures like pipefish and nudibranchs. Sipadan is a place that is simply legendary in the diving circles, that conjures the images of dozens of sea turtles swimming everywhere in the water peacefully, millions of multicolored reef fish and patrolling hammerhead sharks. Diving in Sipadan is a very popular activity and due to this reason, Sipadan is called as the best diving destinations that attract divers from across the world. It is also a wildlife destination and can rightly be called as an ideal combination of a perfect Borneo holiday.

Sipadan is situated in the triangle between Philippines, Indonesia and Malaysia as it is considered as the most bio diverse marine habitants of the world. This island is known for its deep sea trenches, sea mounts, strong ocean currents along with active volcanic islands that creates a complex oceanographic environments which makes it a beautiful paradise for the divers. The beauty of this island lies in its large diversity as every island has varying marine life and dive spots which can makes the divers appreciate this place.

Diving in Sipadan occurs all year around with decent visibility that is experience throughout the year. But if a person want to have the most breathtaking experiences with the dive visibility reaching up to fifty meters, divers will have to visit the island during the dry season that is between March and October. Divers can also enjoy their surface intervals when the temperatures throughout the year range between 21° C to 32° C.

Diving in Sipadan can be done in the twelve dive sites as each sites has its own distinctive features. These sites include North point, West Ridge, Hanging Gardens, Lobster Lair, Staghorn Crest, Turtle Patch, White Tip Avenue and Coral Gardens. Hanging gardens has a good abundance of the soft corals while reef sharks are found at the White Tip Avenue. The most notable sites that are situated in the island include Mid Reef, South Point, Barracuda Point, Turtle Point and Sipadan Jetty. Mid Reef is called as the most colorful dive sites of Sipadan as this site has more corals rather than the pelagic creatures. It is dive site where you will find green turtles, anemone fish, Moorish idols and colorful sea fans. Diving in Sipadan starts from the Sipadan jetty as it has a large number of hard and soft corals as you can also see batfish, mackerel and barracuda swimming. You can also see occasional leopard shark and white tip reef sharks.

Tags:divingseasipadantravel
previous article
Tax Benefits You Can Take Advantage Of For Health Insurance!
next article
Should You Build A Mobile App Or Mobile Website For Your Own Business In The Travel Industry? 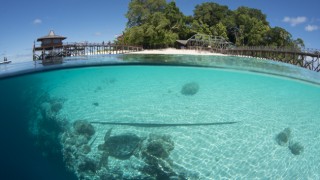