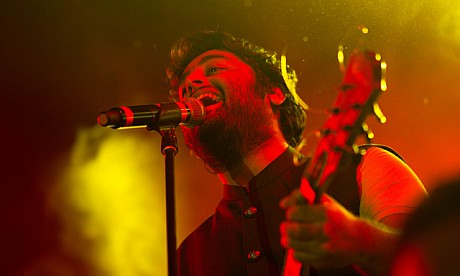 Arijit Singh is hot and happening playback singer and programmer in the Bollywood music circuit. On April 5, 2015 night, this much-loved music star is to hold a concert in Central Park Mumbai.

ARIJIT SINGH- LIVE IN CONCERT! An event is organized by RED LETTERS INC, the top agency in concert organizing scene. One of the most awaited events in Mumbai, this concert is going to be an evening of lovely melodies and soul-stirring music.

The concert will be organized in the massive Central Park. It is one of a kind as the Grand Orchestra has never played for a singer located in India. Navi Mumbai, city of the future is hosting this grand concert of Arijit Singh accompanied by the famed Symphony Grand Orchestra.

Concert starts at 5.00 pm at Central Park, Sector 29 at Khargar, Mumbai. The seating arrangement is as follows:

Arijit Singh was born in Murshidabad. He embarked on his musical career by taking part in the musical reality show-‘Fame Gurukul’ in 2005. Here, he lost in the finals.

Next, he won another show called as 10 Ke 10 Le Gaye Dil, after which he set up his own recording unit to begin his music production career. He went to become as an assistant music programmer to Shankar-Ehsaan-Loy, Pritam Chakraborty, Mithoon and Vishal-Shekhar

Arijit scaled new heights of fame and became a household name after the track-‘Tum Hi Ho’ from Ashiqui-2 released in 2013. The best playback singer (male) award in the 59th Film Fare Awards in 2014 was awarded to him for the same song.

In 2014, he collaborated with Jeet Ganguli for City Lights, which went on to get him more award nominations, especially the romantic rendition of the song, ‘Muskurane.’ He got further nominations in the 60th Film Fare Awards for two tracks: ‘Suno Na Sangamarmar’ composed by Ganguli and ‘Mast Magan,’ a Sufi song composed by Shankar- Ehsan- Loy.

In 2010, Singh had started working with Pritam Chakraborty on three films—Golmaal 3, Crook and Action Replayy. Singh further collaborated with Chakraborty, for the songs “Kabira,” “Ilahi” and “Dilliwaali Girlfriend” for Yeh Jawaani Hai Deewani. Apart from rendering the song “Kabira,” he was associated with the track “Balam Pichkari” as the music producer in the same film.

He made a dubbing for Shah Rukh Khan in the song “Kashmir Main Tu Kanyakumari” from Chennai Express, which was composed by Vishal–Shekhar. He also collaborated with Sharib–Toshi and Sanjay Leela Bhansali by singing the song “Kabhi Jo Baadal Barse” from Jackpot, which is his personal favourite song. But he considers “Tose Naina” from Mickey Virus as “closest to his heart”.

Singh considers KK as his most loved singer and also, Ayushmann Khurrana. He has named Vishal–Shekhar, Pritam Chakraborty, A. R. Rahman and Amit Trivedi as his top music directors.

Author’s Bio: He is a freelance journalist based in Mumbai since several years. He loves to cover the cultural and sporting events in Mumbai. He contributes articles on events in the city to websites like eventshigh.