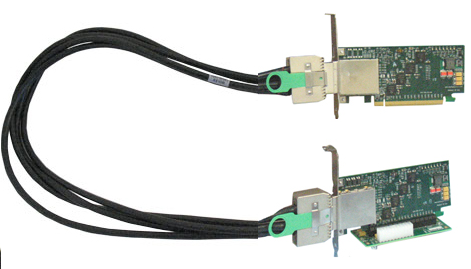 All About PCIE Cables And Expansion

Computers enhance their usefulness and performance when connected to specialized peripheral devices. These devices need to be connected to the computer in a manner that does not compromise power use or bandwidth. Bus expansion technology is the most common and best way to connect peripherals and currently the best connectors for high performance is the Peripheral Component Interconnect Express (PCIE) cable.

Bus extension technology is a system used for increasing the number of available bus slots of either different bus types or same bus types on a host computer system. Bus technology is built by the installation of an expansion card on the host computer then cabling the expansion card to a separate housing which has its own backplane and its own power supply for accommodating peripheral devices.

A typical bus expansion technology system has 3 major parts. The first is the expansion card which is mounted on the host computer. The second is an expansion chassis which provides extra bus slots for plugging in peripheral devices. The third is the specialized cables that are used to connect them. The expansion card works like a sort of bridge for data transfer.

Uses and Benefits of Expansion Technology

The most prominent benefit of bus expansion technology is the increased number of bus slots for connecting peripheral devices. Manufacturers of modern computers only provide some few PCI and/or PCIE slots for adding only a few devices. However, for a user who requires more slots on the host computer then bus expansion technology is the best, simplest, most efficient, and least expensive option.

Another benefit derived from bus expansion technology is the interoperability of different types of buses. This is made easier by the separation of the housing from the host computer as the peripherals are connected to the separated expansion system. This provides greatly enhanced computing power similar to that of a server-grade computer and enables accurate triggering and synchronization.

Separating the host computer and the I/O cards is also a great idea as it allows one to keep the computer at a safe distance while having the I/O cards conveniently placed. For example, one might need to have the I/O cards next to the measuring equipment or next to sensors or actuators. This flexibility of placing computers and peripherals is made possible by the use of expansion cables.

This increases the performance of measuring equipment and performance of peripherals since when separated from each other there is minimal interference from computer memories, chipsets, and CPU. One can even modulate the expansion chassis that houses the I/O cards so they can be easily replaced thereby reducing MTTR.

Unlike the parallel PCI bus, the PCIE bus is a serialized connection cable that transfers data in form of serialized data packets in speeds of over 2.5GB/s. PCIE-based expansions are easier to formulate or design compared to other expansion solutions such as PCI. While the PCIE offers better performance and higher speeds, they come with the challenge of maintaining data signal integrity.

This is easily achieved by placing a repeater or an equalizer for enhancing the signal’s intensity. A PCIE riser/PCIE Extension Cable can offer up to about 7 meters in terms of expansion distance with a latency of less than 0.5 us and a sustained data transfer rate of 100 MB/s and above. With the PCIE, you can just connect your expansion card while the computer is running and all the cards installed on the expansion chassis will be automatically recognized and run without the need to run installation programs or drivers.

For PCIE-to-PCI expansion, a user can adopt legacy PCI cards with a new computer that is equipped with PCIE architecture. This offers the advantage of speed as PCIE is a relatively new networking technology that offers in excess of 4GB per second of non-shared bus bandwidth.

The PCIE-to-PXI expansion offers similar advantages and allows PCIE-slotted computers to exercise control over PXI modules. This type of expansion also offers enhanced latency and sustains high data rates during transmission. This is because of the point-to-point feature offered by PCIE cables.

The PCIE offers a dynamic high speed connection for multiple peripherals to a host computer. To enjoy the benefits offered by a PCIE expansion system you need to select the correct bus for your computer system then select a corresponding bus and expansion chassis that your host computer will extend to. Select the appropriate PCIE cable according to the expected expansion distance. Typical lengths for PCIE cables are 1 meter, 2 meters, 3 meters, 5 meters, and 7 meters.

Small local networks and computer peripherals can utilize multiple chassis systems based on a PCIE expansion which allows for high non-shared bandwidth. This is helpful for entertainment such as film editing, gaming, HD cameras, and theatre projectors. The expansion technology is also widely used in medicine for CAT scanners, PET scanners, and other imaging solutions. Security industries and the military also use the technology for enhanced performance and high data integrity.

Charlie Donovan started out as an online marketer and developed a passion for visual marketing. Advertising has been one of his major strengths and part of his key business offerings. Based in Florida, his team produces some of the most astounding banner ads.

previous article
What Should You Look For In A GRE Coaching Centre?
next article
The Key To Lasting Weight Loss