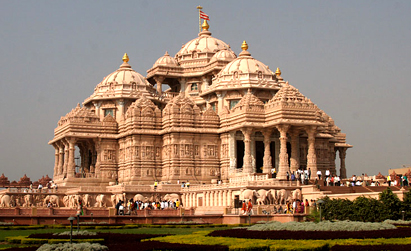 The shrewd business oriented Gujaratis are best known for their genuine hospitality, ethnic food, and a deep-rooted culture. It is quite often that you will see a Bollywood movie or an Indian television drama based on the typical Gujarati family. Sumptuous food like Dhokla, Methi ka Thepla, Handvo, ethnic Gujarati attire that consists of Chrono and Kediyuand, Chaniya and Choli, and the colorful festivals of Gujarat like Navratri, Janmashtami, Kite Festival, etc. are already widely known throughout the country. Attributes like the aforementioned are not only hard to ignore, but also lure a culture enthusiast into visiting the state. It is hardly ever a case that one can simply pass by the place without being attracted towards the popular destinations of the state.

Ahmedabad, in Gujarat, is a bustling city and on the threshold of becoming one of the chief commerce hubs in the nation. It is the sixth largest city in the country and popularly recognized as the twin city of the state’s capital, Gandhinagar, which is about 30 k.m. away. Equipped with every parameter of modernization, including plush residencies, state-of-art airport, first-rate luxury and 3 Star hotels in Ahmedabad, comprehensive shopping malls, entertainment centres, etc., the city is the representation of Gujarat in 21st century. Although, the place is not very well-known “tourist destination”, it still worths a visit. Actually, as not many people head to the place with tourism as the main purpose, so that gives a tourist in the place, plenty of space as well as time to explore and relish the city to the fullest. Plus, it is very likely that the tourists get a warmer welcome here.

The place is bestowed with a golden history. For about 400 years, it was ruled by the Hindu kingdom of Karnavati and was originally called Karnavati. In 1411, the place saw the rise of Sultan Ahmed Shah, who gain control over the place by defeating then ruler and later renamed the place Ahmedabad. In subsequent years, it fell under the reign of the Gaekwad and the Peshwa. Being ruled by different kings and rulers resulted into the place becoming a cradle of different cultures, religions, architecture etc. Old monuments are scattered  all over the city. They are important parts of Ahmedabad tourism and provide a glance at the history of the place. Bhadra Fort, built in 1411, still stands tall in the city. Once home to the royal families, there are old remnants of royal palaces and well-laid gardens within the fort’s walls. You can easily access it, as the fort is a well-known landmark with numerous taxis and cabs available for the purpose.

Another chief reason for one to visit the city is that, Ahmedabad is the host to the Sabarmati Ashram of Mahatma Gandhi and was the cradle of the nonviolent movement for India’s freedom. A few kilometers off the city centre exists the Sabarmati Ashram aptly set in the midst of tranquil surroundings of Sabarmati River. For any person who considers himself a true follower of Gandhi, the ashram is a must visit. It still continues the work started by Gandhiji and is home to a handicraft centre, handmade paper factory and a spinning wheel factory.

There are several other interesting attractions unique to the place and spread all over the places. Head to the city to explore and relish them all. Finding a comfortable accommodation is easy; there are multiple hotels and other lodging options to pick from. Simply, make an inquiry about the hotel room say, Oyo rooms in Ahmedabad, in advance, book the rooms and flight tickets, and get going to the city!

Dimpy Roy is a travel writer working with an Online Travel Guide. She guides travelers to various resources where they can find best Oyo rooms in Ahmedabad and choose the best one.