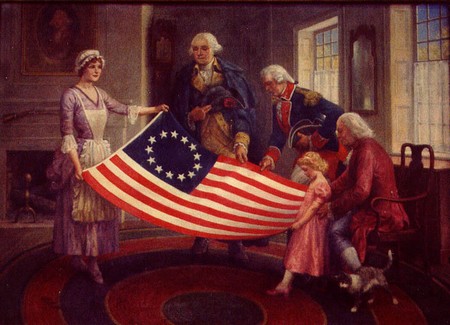 A Short History Of The US Flag

The US flag of is a symbol of its democracy, freedom and unity. It is the very essence of the country’s spirit. However, if you delve into the history of the US flag, you will find it extremely interesting.

Many of you may not be aware that the flag of the US has been altered a whopping twenty-seven times until 4 July 1960 when fifty stars were added to it.

It is said that the first US flag was stitched by a lady called Betsy Ross, who was a seamstress by profession. However, there is no proof to substantiate this, so it is open to debate.

Some claim that the first US flag was the Grand Union flag, which George Washington used during the initial period of the American Revolution. The flag was created by a lady called Margaret Manny. However, this flag was not considered to be the official flag. It consisted of thirteen red and white stripes alternating with one another and it had the Union Jack at the corner. The design of the flag was influenced by the flag used by the British East India Company.

When it comes to the first official flag, as mentioned earlier, it is believed that it was stitched by Betsy Ross from Philadelphia. If stories are to be believed, then George Washington was acquainted with Betsy and knew of her sewing skills. In the month of May 1776, Washington, who was the head of the Continental Army, paid a visit to Ross’ shop along with two other men. Washington carried a drawing of the flag, which supposedly had 6-point stars. However, Betsy showed Washington how easy it was for her to cut a 5-point star as long as the cloth was folded in the right manner. This art of hers impressed Washington and stars were changed to 5-point stars. However, Betsy’s role became known much later, some ninety-four years later, when William Canby, Betsy’s grandson, made a speech at the Philadelphia Historical Society in the year 1870.

This flag was made up 13 stripes, red and white, and it had a circle of 13 stars that symbolized the 13 colonies of the Union. The stars were laid on a blue edging.

The actual arrangement of the stars was never specified, and in museums all over the country visitors can see examples of the Stars and Stripes with different patterns, sometimes a circular field of stars, sometimes horizontal or vertical lines, but this all changed in 1912 when President Taft signed an executive order stating the stars should be in 6 rows of 8 columns, and that each star needed to point to the top of the flag.

After the admission of Alaska and Hawaii into the United States of America in 1959, the flag underwent a final change, two more stars were added, but the Army Institute of Heraldry chose a new layout for the stars, 9 rows of 6 and 5 alternating columns. Today all manufacturers of US flags use this official design. If you want to purchase one, you can find cotton American flags from FlagsExpo.

However, many historians debate and argue about Betsy Ross’ role in designing the first flag of the US. They say that there is no proof that the Continental Committee actually had a design in place for the flag in the year 1776. Also, Washington was not part of the Continental Committee. Above all, there is no proof to show that Washington was acquainted with Betsy Ross.

Evidence shows that Francis Hopkinson may have been instrumental in designing the first American flag. Hopkinson was a member of the Congress from New York. He wrote a letter to the Board of Admiralty in the year 1870 saying that he was responsible for designing the first flag of America. When the Flag Resolution was accepted, Hopkinson was the chairperson of the Middle Department of the Continental Navy Board. He even wanted to be compensated for the design which was rejected as he was deemed a civil servant, who was getting paid a salary to perform his duties.