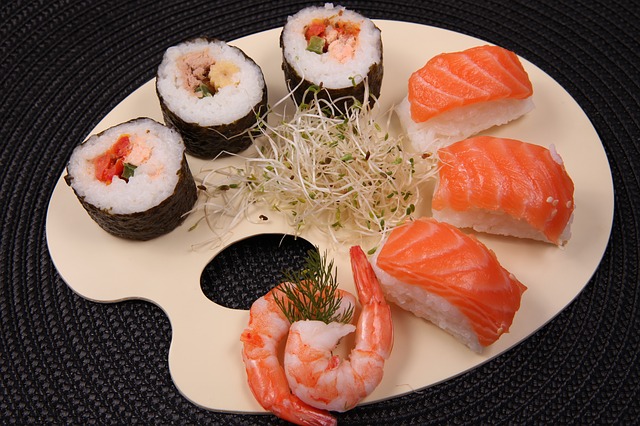 A Century Of Sushi Tradition In America

Sushi is one of mankind’s oldest food preparations most likely originating in southeast Asia during the Iron Age. It is known that people along the Mekong River of the Far East were eating sushi as early as 300 B.C.

What we recognize as sushi today was developed to preserve fish using fermented rice and salt. This cured the meat making what is called a lacto-fermented rice dish. It became a standard commodity in China around the second century A.D. It entered Japanese culture probably around 600 A.D.

It would be more than 2,000 years before sushi made its way to America. The dish was introduced into U.S. culture by Japanese immigrants in early 1900s Los Angeles. This was a period when thousands of Japanese came to America after a reform period in Japan called the Meiji Restoration. The Japanese brought their culture with them and sushi was a significant part of their culinary tradition.

Americans in L.A. were not only welcoming of Japanese immigrants in the early 1900s, but fascinated with their culture. A period of “Japanophilia” developed in Los Angeles. All things Japanese was in vogue among high society southern Californians. They eagerly attended social functions hosted for and by Japanese people. Sushi was often on the menu.

The first known mention of sushi in America was noted in an article that appeared in the Los Angeles Herald on Aug. 18, 1904. The story covered events of a fancy party held by socialite Fern Dell Higgins. Sushi was on the luncheon menu.

By 1905 notations of sushi began to appear in a scattering of newspapers stories far away from Los Angeles, including such relatively remote locations as Bismarck, North Dakota, and Minneapolis, Minnesota. It was considered trendy and fashionable to serve the exotic Japanese raw fish and rice preparation at posh society gatherings in major Midwest cities, such as St. Louis, Chicago and the Twin Cities.

Unfortunately, the American love affair with Japanese culture went sour just a few years later. It was international politics that got in the way. In 1907 Japan tensions had developed between San Francisco and Japan over immigration. The U.S. and Japan entered into an informal agreement in which Japan agreed to no longer allow its citizens to immigrate to America.

At the same time, anti-Japanese sentiment began to grow among rank-and-file Americans. This put the breaks on the acceptance of all things Japanese, including Japanese cuisine. Opening a sushi restaurant in America was simply not viable, a situation that obviously became far worse after the Japanese bombed Pearl Harbor on Dec. 7, 1941. World War II ended in 1945, but it would take about 15 years before Americans would be ready to embrace elements of Japanese culture again in a significant way.

Proving that time heals all wounds, sushi restaurants began appearing in the United States in the early 1960s. This time it was a bi-coastal phenomenon. Los Angeles was again a primary location where sushi bars could gain customers and commercial traction. However, New York City also became an environment where daring diners were eager to try new things. They were willing to expand their restaurant experiences with a certain exotic raw fish dish from the Far East — sushi.

Food historians point to the Kawafuku restaurant in the Little Tokyo section of Los Angeles as the first truly successful and robust sushi operation. It was established by Noritoshi Kanai who teamed up with an American Jewish businessman by the name of Harry Wolff. The pair of entrepreneurs are said to be the first to export large quantities of fish directly from Japan for the purpose of making sushi.

Kawafuku was initially established to provide a venue for the growing numbers of Japanese businessmen coming to Los Angeles, but they often invited their American associates to join them. As a result, sushi caught on with American diners.

In New York, Nobuyoshi Kuraoka is credited with being the first to open a sushi bar in New York City in 1963 — an eatery he dubbed Nippon. It became an instant hit with celebrities and the powerful elite, including members of the Kennedy family. Mr. Kuraoka and his Nippon establishment were so popular and influential that this single sushi bar is credited with shaping the entire Japanese food culture of New York to this day.

The U.S. Department of Labor reports there are some 4,000 sushi restaurants in America today generating more than $2 billion in sales every year.

Christopher is a food lover and always seeking new healthy ways to live stronger and better both physically and mentally. Sushi has become a delicious weapon in his current fight for a healthier mind and body.